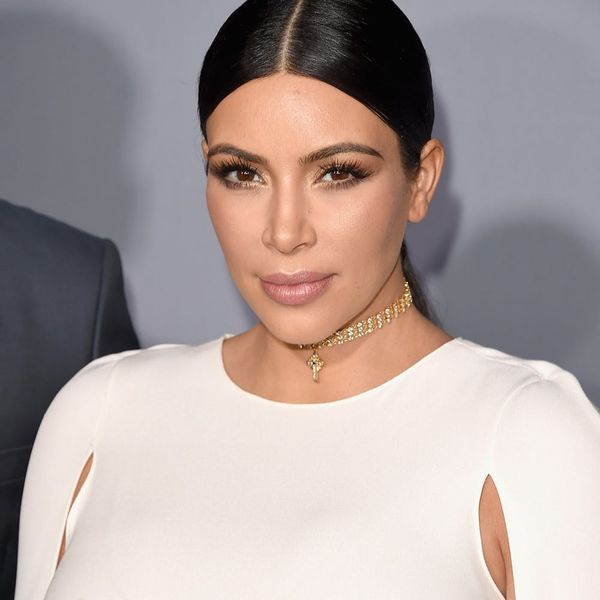 Over the course of this year’s Hallo-weekend we’ve spotted some pretty epic costumes. From Jessica Alba’s Romy and Michelle get-up to Heidi Klüm’s EPIC Jessica Rabbit ensemble, we were totally impressed by the characters our favorite celebs chose to channel this holiday. But in typical Kim Kardashian style, the outfit she wore on All Hallows’ Eve might just take home the award for cleverest costume of 2015. This year, Kim went as – wait for it – Kim Kardashian. It’s so meta our brains can hardly handle it.

Yesterday Kim shared a couple photos of her rewearing that infamous Met Gala Givenchy dress she rocked in 2013 whilst pregnant with North. After its first debut, the dress was immediately transformed into just about a million memes, mostly due to the super bold print and matching gloves. But apparently all the criticism has only made Kim love the outfit even more. She captioned one photo, “I think I nailed the Kim K costume!” In another she added, “Still fits…”

We have to commend Kim for not only being able to make fun of herself, but also for being able to find a clever way to rock a statement outfit more than once. In fact, this has us thinking, why don’t we do this with our own wardrobe more often? Obviously, Halloween has come and gone so we can’t necessarily go the costume route, but if you have an old formal dress buried in your closet who says you can’t wear it to your cousin’s wedding later on down the line? And that old bridesmaid dress? Maybe it could totally work for your upcoming charity gala.

While it might currently be taboo to be spotted wearing things like formal gowns more than once, we vote it’s time to make that rule ancient history. Because let’s be honest, those dresses are way too expensive to be a one and done sort of deal.

Have you found a creative way to rewear a formal dress? Share with us in the comments below