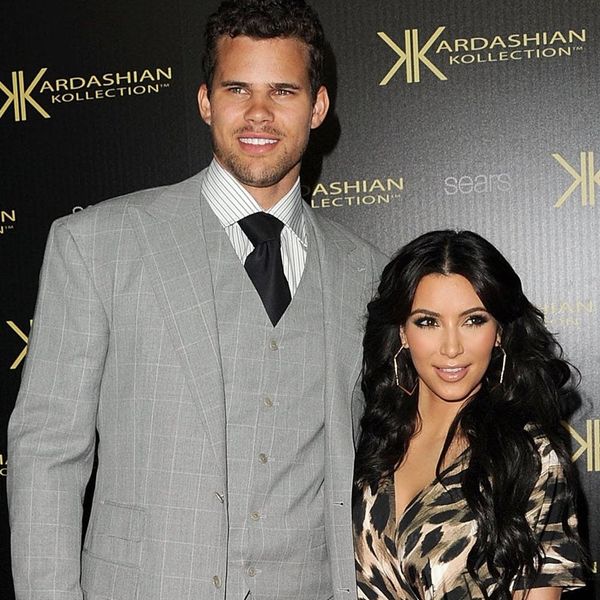 Kris Jenner has always been very involved in her children’s personal affairs, balancing her role as their manager with that of their loving mother (see her first public message after Kim Kardashian West’s robbery). And while her kids may not always agree with their momager on camera, when it comes down to it, they (usually!) follow her advice. Unfortunately, Kardashian West chose not to heed one of the matriarch’s most important offers of guidance in recent years: to put off her wedding to NBA player Kris Humphries.

In a new interview with The Hollywood Reporter, Kardashian West (now married to Kanye West) admitted that Jenner wanted her to call the whole thing off. “The night before, my mom pulled me aside, off-camera, and was like, ‘This isn’t it for you. Why don’t you go away and I’ll handle it?’”

She wasn’t the only one with misgivings. “My friends told me I just had cold feet, but even the producers said, ‘You don’t seem happy. You don’t have to go through with this,'” the entrepreneur shared.

But Kardashian West would not be deterred, despite the fact that she had been having serious reservations about the impending nuptials. “There was all this attention on the wedding, and I thought maybe it was just the pressure of the show giving me this anxiety,” she explained. “I felt like, if I pulled out now, everyone’s going to think I just did it for the show.”

Thank you @hollywoodreporter, what an honor! #TheKardashianDecade

In the end, Kardashian went through with the $10 million August 2011 wedding in front of 400 guests that included Lindsay Lohan, Eva Longoria, Ryan Seacrest, Julianne Hough, Kathy Lee Gifford, Mel B, George Lopez, and Serena Williams, with a performance by Stevie Wonder as well.

Sadly, her doubts about her marriage didn’t go away after the wedding was over — the makeup maven told THR she knew she wanted to end things pretty quickly. “Afterwards, people were saying, you have to stay married for a year, but I physically couldn’t do it.” She publicly announced her separation from Humphries 72 days later, finalizing her divorce in 2013.

Luckily for her, it appears that the third time was the charm (Kardashian West was also previously married to Damon Thomas for four years in the early aughts): She and West celebrated their third wedding anniversary back in May.

Are you surprised that Kris Jenner tried to get Kim Kardashian to walk away from her wedding to Kris Humphries? Let us know @BritandCo!

Desiree O
Desirée O is a ‘Professional Bohemian’ who loves anything and everything related to the arts, entertainment, and pop culture. She ADORES being a ‘Newsy’ for Brit + Co, covering all of the latest tidbits of awesomeness that you want to read about. When she’s not writing, she’s either making messy art, going on long adventurous walks with her camera, or poking around over at bohemianizm (http://www.bohemianizm.com/). You can find out about Desirée O and her work at http://DesireeO.com/ or follow her on Twitter @DesireeO.
Celebrity Wedding
Celebrity News
Celebrity Wedding Kardashians
More From Celebrity News