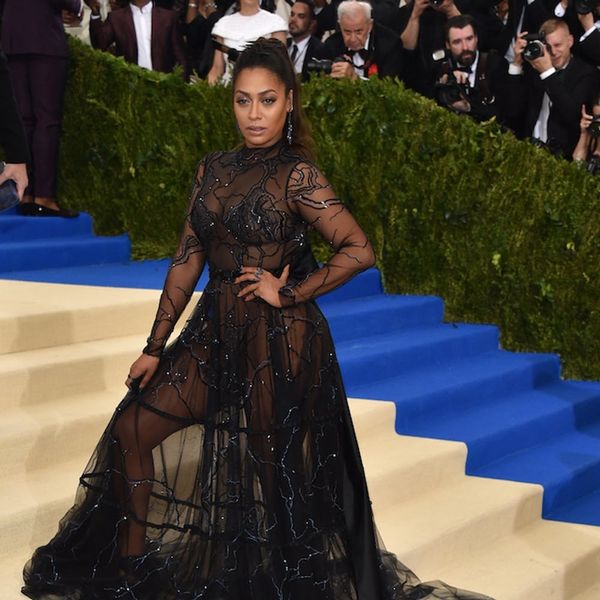 La La Anthony attended the 2017 Met Gala alone and sans one very important piece of jewelry. Ahead of slaying the red carpet, the multihyphenate Instagrammed a photo of herself wearing the Thai Nguyen Atelier sheer long-sleeved black gown with a high ponytail, captioning it, “Unbreakable.”

Anthony recently split with her husband of nearly 10 years, New York Knicks player Carmelo Anthony, who allegedly had an affair. This was her first time ever attending the Met Gala without Carmelo. The couple attended the star-studded event together every year, other than one, for the last six years.

In the absence of a date, the former MTV host instead sent a very clear message with her Lorraine Schwartz jewels. She wore a ring on EVERY single finger — except for the ring finger. In case you missed it, Anthony is definitely NOT married.

What do you think of La La’s statement? Tweet us @BritandCo.

Channing Hargrove
Channing Hargrove is a freelance fashion editor and writer in New York City. When she isn’t writing about clothing (or shopping, for research, of course), Channing is writing about life in a tiny studio apartment in a big city — and what she’s wearing — on her blog, Channing in the City.
Celebrity Style
Celeb Style
Celebrity Style Controversy Designer Jewelry Met Gala rings
More From Celeb Style