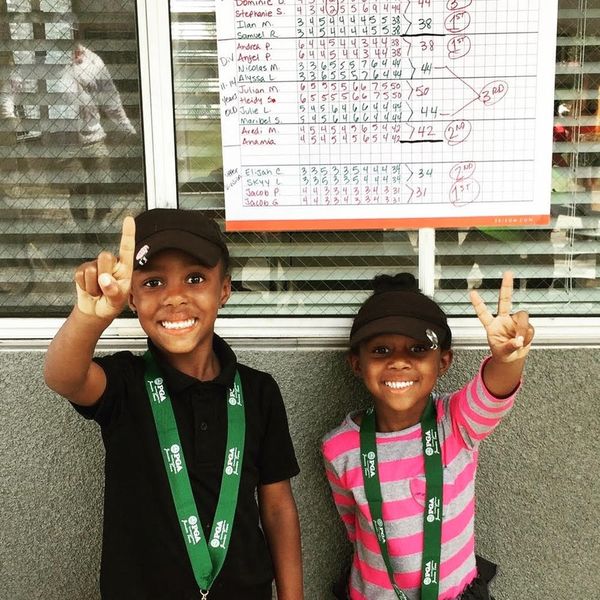 By the time Layla and Roxanne Phillips started preschool, they’d already spent half their lives at the golf course. Now, the young sisters from South Los Angeles are shaping up to be the golf world’s Venus and Serena.

Last month, six-year-old Layla won a Southern California PGA drive, chip, and putt competition. She also recently competed in the IMG Academy Junior World Championships, an international tournament with the best young golfers from all across the globe.

The adorable young athletes got their early start in the sport by chance. Layla and Roxanne’s father Kasey Phillips explains, “In our former neighborhood [in South Los Angeles], there was a golf course right behind our house. My wife [Jasimen Phillips] wrote a letter to the golf course complaining about the balls hitting the house. She got a response offering us free lessons and my wife decided to take advantage of it.”

Mr. Phillips says he is typically the sports fan in the family, but his wife really took a liking to golf and quickly introduced their oldest daughter Layla to it. After realizing her natural knack for the game, they regularly made the 40-mile drive down to Newport Beach, the only place that offered lessons to kids as young as Layla.

As soon as Layla’s younger sister Roxanne was able to walk, she immediately followed in her older sister’s footsteps. Now that the girls are a little bit older, they’re teeing off at courses a little closer to home.

Mr. Phillips credits LA County’s golf programs and Maggie Hathway Golf Course (the course Jasimen Phillips initially wrote to) with the girls’ young success. Maggie Hathway ended up allowing them to play on the course for free and provided them with free clubs.

In a recent report by ABC, Luis Batson, the girls’ coach and the CEO of the nonprofit organization Help Youth Through Golf, said, “They are very, very good. I can only compare them to the sisters Williams in tennis.”

While Layla didn’t take home the title during July’s IMG Academy Junior World Championships, Mr. Phillips says she won a recent US Kids tournament, where she achieved her best score ever: a 37 on a nine-hole course.

Younger sister Roxanne is only starting to compete in tournaments, which is fair since she’s just turning five this month. In fact, she just attended her first US kids tournament. She didn’t win that one, but Mr. Phillips tells us,”We have confidence that as she golfs more she’ll get off to an even stronger start than Layla did.”

He also adds, “In the putting competitions they do in the county programs, Layla usually finishes first while Roxanne finishes second.”

These days, the Phillips sisters can be spotted at the golf course pretty much every day after school. They’ll have a long career ahead of them if things keep swinging in their favor. But is a professional career the end goal here?

Mr. Phillips says that’s not the priority. “Right now we’re just hoping for a college scholarship,” he says. “That’s as far as we’ve looked at it at this point. They’ll only to continue to get better, but college is the biggest thing we can hope for.”

(Photos via Jasimen and Kasey Phillips)