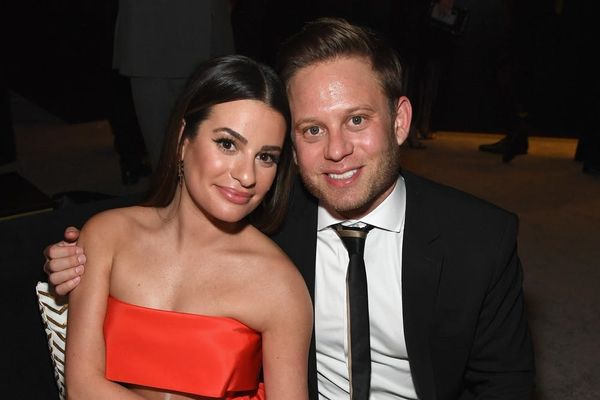 Sing it from the rooftops: Lea Michele is married! The Glee star said “I do” to her fiancé, AYR clothing president Zandy Reich, on Saturday, March 9.

The couple, who got engaged in April 2018, exchanged vows in an intimate ceremony in Northern California, which was officiated by none other than Glee creator Ryan Murphy, Us Weekly reports. By Michele’s side was her maid of honor, BFF Jonathan Groff, whom she met over a decade ago when they both starred in the Broadway production of Spring Awakening.

There were several famous faces among the guests, too, including some of the beaming bride’s Glee and Scream Queens costars, such as Darren Criss, Becca Tobin, and Emma Roberts.

Sharing an exclusive snap with People, the pair revealed only a few details about their nuptials, which appear to have taken place under an archway of white roses and lush greenery. The 36-year-old groom looked dapper in a dark blue suit with black lapels, while the 32-year-old bride stunned in a strapless ballgown. The design featured a layered skirt and a unique, structured neckline. She completed her look with a long veil, an all-white bouquet, and simple diamond drop earrings.

Speaking about their big day with People, the newlyweds gushed, “We are so excited to be married and grateful to be surrounded by our friends and family. And most of all, we’re so happy to spend the rest of our lives together.”

RELATED: Celebrity Weddings and Marriages in 2018