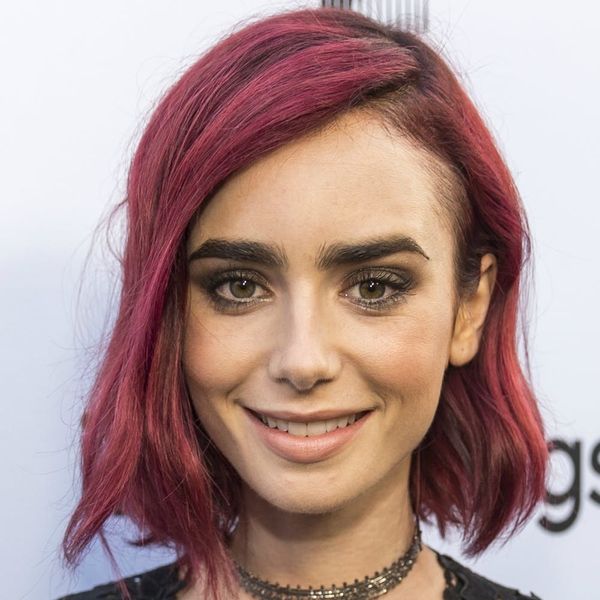 Lily Collins, much like Taylor Swift or Lauren Conrad, has undergone a MAJOR style transformation as of late: The once Audrey Hepburn-esque pixie-haired classic beauty has gone from a dead-ringer for her former Snow White character in Mirror Mirror to a badass babe with some serious edge.

Flashing some back for #fbf. A beautiful keepsake from an incredibly memorable Korean adventure. Thank you @tattooist_doy for adding your artistry to my personal collection. Self love is the most important kind #LoveAlwaysandForever #lilypadinbloom #KrazyinKorea...

“Flashing some back for #fbf,” she jokes of the piece, a woman sitting on a lilypad.

Though she’s had the pictured quote (along with several other ink pieces, including an English rose and crowned-angel wings) for some time now, this latest backpiece is a direct nod to her experiences in Korea while filming her upcoming role in Okja alongside Tilda Swinton and Jake Gyllenhaal. “A beautiful keepsake from an incredibly memorable Korean adventure. Thank you @tattooist_doy for adding your artistry to my personal collection,” Lily says, adding “Self love is always the most important kind.”

She also shared this shot of her getting the tat, writing, “No pain, no gain.”

Dayum, girl! You have us feeling inspired. Between this and these summer-inspired tats, we think it just may be time for some new ink of our own. Who’s with us?

What do you think of Lily’s new look? Let us know over at @BritandCo!

Nicole Briese
Nicole is the weekend editor for Brit + Co who loves bringing you all the latest buzz. When she's not busy typing away into the wee hours, you can usually find her canoodling with her fur babies, rooting around in a bookstore, or rocking out at a concert of some sort (Guns N' Roses forever!). Check out all her latest musings and past work at nicolebjean.com.
Tattoos
Celebrity News
Tattoos