14 Congee Recipes for When Your Rice Porridge Craving Strikes 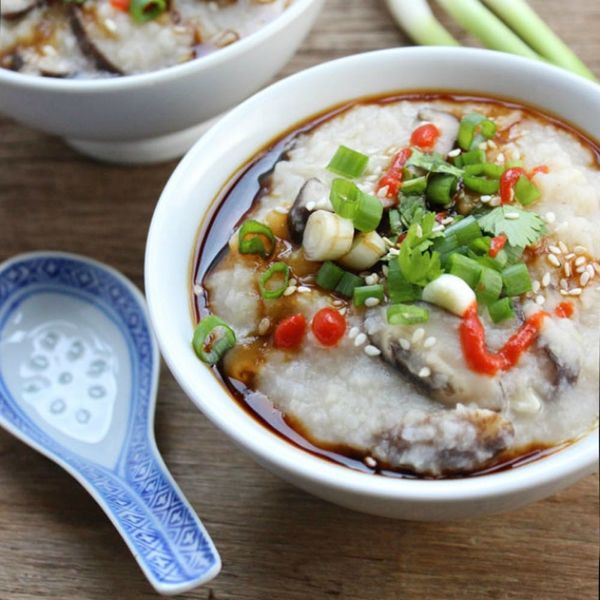 While rice is delicious in every form, from rice bowls to rice noodles to sushi burgers, it’s deeply satisfying when it’s served up in congee. The Asian import — a DIY rice porridge — is the perfect opportunity to use up that *leftover* rice, since it has a higher starch content which adds extra creaminess to the dish. Here are 14 congee recipes that show you how it’s done.

This recipe calls for just three key ingredients and is made in the slow cooker while you get other stuff done. (via Kitchn)

A lot of congee recipes call for bone-in meat, but dried shiitake mushrooms make a gorgeously chewy and flavorful substitute. Toppings like green onions, cilantro, sesame seeds, soy sauce, Sriracha, and a few drops of toasted sesame oil will give it a multi-dimensional flavor. (via It Doesn’t Taste Like Chicken)

This recipe calls for miso, which layers in an umami dimension. (via Playful Cooking)

Bookmark this congee for a day-after Easter meal. It will take that leftover ham bone and make a second feast of it. (via Roti ‘n’ Rice)

If you HEART savory foods in the morning, try a breakfast congee that’s 100 percent vegan. Plus, it tastes just as delicious for lunch or dinner. (via Vegan Heaven)

When it comes to congee, simplest is often best. This recipe is flavored with just a handful of dried scallops and a few pieces of shrimp. It has such a rich flavor, it’s hard to believe it’s made with just water, not homemade stock. (via Omnivore’s Cookbook)

Congee is a *healing* meal, and this brown rice version calls for lots of the natural superfood ginger. Next time you feel a cold coming on, start some congee on your back-burner and you’ll be feeling good as new in no time. (via Gather & Dine)

This congee is a great budget meal, because just a cup of rice makes a whole pot of soup. Top yours up with whatever fixins you have in the fridge and it’s all good. (via The Nomadic Wife)

Don’t toss that leftover rotisserie chicken carcass — unless you’re *tossing* it into the slow cooker. Start it in the morning and those leftovers will become a comforting meal by lunchtime. (via Roti ‘n’ Rice)

If you haven’t tried tempeh yet, this version fried in sesame oil is a great place to start. (via Avocado a Day Nutrition)

You’ll want to make this recipe in the biggest pot in your cooking arsenal, so there will be plenty of leftovers to reheat the next day. Pro tip: Salt the pork bones overnight before cooking and you’ll have yourself a flavor bomb for sure. (via The Woks of Life)

Anyone who grew up eating congee will tell you they *crave* it anytime they’re feeling under the weather. This three-ingredient recipe is easy to cook, even if you’re feeling low-energy, and it’s as comforting as a warm blanket and fleecy pajamas — which might also be what you wear while you’re eating it. (via The Worktop)

While you’re scrounging the fridge for delicious toppings, don’t overlook the egg. A protein-rich poached egg is the real star of this show. (via One Lovely Life)

If you don’t have time for slow-cooking methods that break down the rice to the right porridge-y creaminess, you can fast-track this recipe in your Instant Pot. Don’t leave out the little dash of Sriracha for an extra shot of zing to your taste buds. (via Budget Bytes)
Sally Jones
Sally Jones is a writer and editor living in New York City. She has worked at many websites including iVillage, Ladies Home Journal, More, Parenting, Cosmopolitan, The Knot and YourTango, in jobs ranging from editor to COO. Renovation and interior design are her unhealthy obsessions hobbies. She has renovated every home she's lived in, including the rentals, and like... whoa, who does that? You can catch her at her blog Renov8or.
Dinner Recipes
Healthy Eating
Dinner Recipes Healthy Recipes recipe roundup
The Conversation
More From Healthy Eating