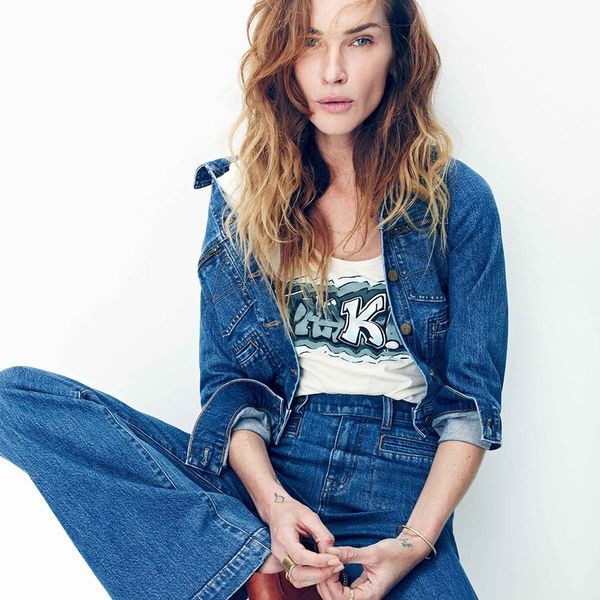 If you’ve been hiding in a fashionless cave for the last 20 years, that’s actually super convenient for you because ’90s style is alive and kicking. Between the revival of hair scrunchies, denim overalls and flatforms, all our favorite childhood looks have made a triumphant return. If you weren’t already on board with all the style nostalgia, Madewell’s newest ’90s inspired collaboration with Daryl K aught to do the trick.

If you’re not immediately familiar with Irish-born, cult-favorite fashion designer Daryl Kerrigan (Daryl K for short) she was basically a staple in the ’90s New York club scene. In 1991, Daryl set up shop in New York’s East Village where her friends would gather there before heading out to legendary nightclubs. She soon began designing clothing for musicians, performers, artists and drag queens alike. Eventually, Daryl developed her now famous Hip Hugger Bootleg Jean, which garnered famous fans like Sonic Youth’s Kim Gordon.

Given that information, it makes total sense that Kim Gordon also happens to be one of the three faces featured in the collaboration’s lookbook. Additionally, you’ll spot Kim’s 21-year-old daughter Coco and model Erin Wasson.

The 18-piece collection relies heavily on denim. You’ll find a midi skirt, flared pants, an overall dress and of course, a button-down made of the material. A few other standouts include a suede fringe jacket, a printed, billowy blouses and simple, super versatile handbags.

The looks somehow seems to flawlessly blend the old with the new. They evoke the spirit of the ’90s without making you look like you found a magic way to fit into all the clothes you used to wear in elementary school. The Madewell + Daryl K collection is available to top Madewell customers today but if you’re not on that exclusive list, everything will be released to the general public on February 10.