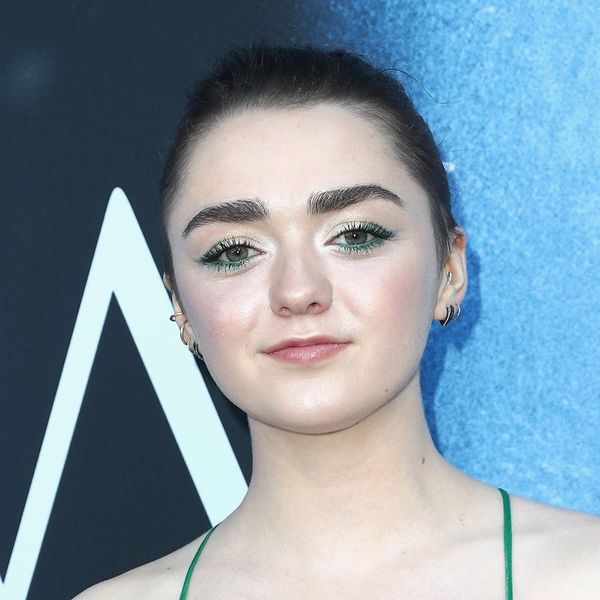 Game of Thrones will premiere its long-awaited seventh season in just a few short hours (eee!), but Arya Stark, erm, we mean Maisie Williams, has already made a rather big debut this weekend. The star showed up to the HBO’s official premiere in LA on Thursday dressed to the nines in a silky green Milly number with one very special accessory on her arm: Her boyfriend of several years, Ollie Jackson.

Though Jackson has attended red carpet events with Williams before, it was the first time the he was publicly photographed alongside the 20-year-old, who just began sharing photos of her beau on social media back in February.

She certainly wasn’t shy about posing alongside her love Thursday night, however, posting a smashing shot of herself and Jackson, along with the caption, “Look at that DIAMOND on my arm,” in reference to her beau on Instagram. “Looking sharp in his @joshuakanebespoke suit.”

Dapper as he might look, Jackson’s face isn’t one you’ve likely seen before — he’s not (yet) famous, having met Williams at school, a little known fact she divulged to British InStyle back in 2016.

What can I say. I like the way you're put together 🌶☠️

Her former-classmate-turned bae seemed equally thrilled to be out on the town with his longtime love, posting a similar snap and writing, “What can I say. I like the way you’re put together.” 🌶☠

He also gave us a glimpse behind the scenes with a black and white shot taken from the official after party. “With the Queen of assassins,” he wrote.

Game of Thrones, season 7 premier after party with the Queen of assassins ❤ 📷 - @alexinwonderlust K.J

Looks like we just got a brand new duo to ship come awards season!

Are you shipping these two? Tell us over @BritandCo.

Nicole Briese
Nicole is the weekend editor for Brit + Co who loves bringing you all the latest buzz. When she's not busy typing away into the wee hours, you can usually find her canoodling with her fur babies, rooting around in a bookstore, or rocking out at a concert of some sort (Guns N' Roses forever!). Check out all her latest musings and past work at nicolebjean.com.
Celebrity Couples
Celebrity News
Celebrity Couples love Red Carpet
More From Celebrity News