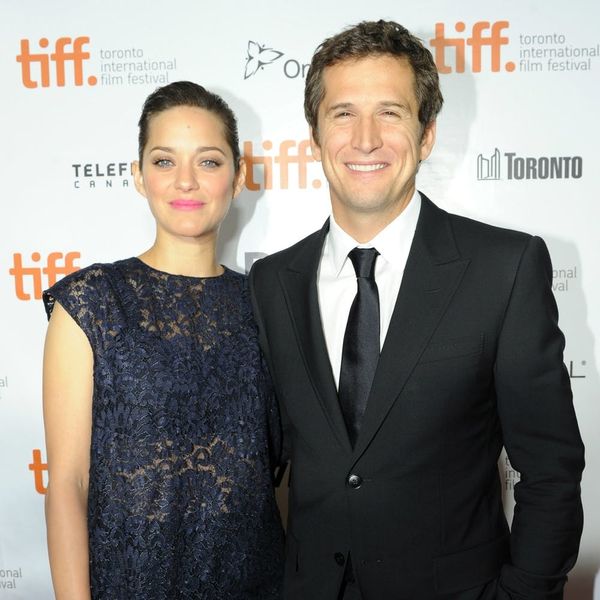 Marion Cotillard has had one helluva’ week! Following news of the split that shocked the world when Angelina Jolie filed for divorce from Brad Pitt, it was widely reported that the French actress probably (read: definitely) had something to do with it when Angelina supposedly caught Brad cheating with his co-star on the set of their shared film, Allied.

Though there’s now rock solid video proof that the pair’s split was actually a result of a heated fight on a plane, there are plenty of people still dying to believe that Marion is a home-wrecker. There’s one person, in particular (besides Adele, that is), that isn’t particularly interested in what the tabloids say about his lady love, however: Marion’s actual baby daddy, Guillaume Canet.

Following the lead of his partner, who personally took to Instagram to address the rumors earlier this week, Guillaume has now penned a lengthy reaction of his own in his native tongue of French beneath a photo of a warning sign, the full statement of which reads as follows.

“I don’t usually make it a habit to comment on rumors about us. I also don’t usually talk about my private life until now. I have always protected [it] attentively. But the fury of the tabloids, the venal stupidity of some people calling themselves journalists, the haters who feel braver behind a keyboard, drive me to speak of the love, pride, respect and admiration I have for Marion staying as strong and intelligent in the face of all these stupid and unfounded accusations,” he writes. “I think we’re all living with much more important things at this moment and now it’s time to move on and raise the bar a bit. Even if [that] is so much work for some, I want to be positive. And as Marion said so well, I hope you get better and aspire to something in your life than constantly sending sh*t!”

Good for Guillaume for defending Marion’s honor — we, for one, think they make quite the lovely pair — actually, make that soon-to-be trio!

Are you touched by Guillaume’s sentiments? Share over @BritandCo!

Nicole Briese
Nicole is the weekend editor for Brit + Co who loves bringing you all the latest buzz. When she's not busy typing away into the wee hours, you can usually find her canoodling with her fur babies, rooting around in a bookstore, or rocking out at a concert of some sort (Guns N' Roses forever!). Check out all her latest musings and past work at nicolebjean.com.
Controversy
Celebrity News
Controversy love