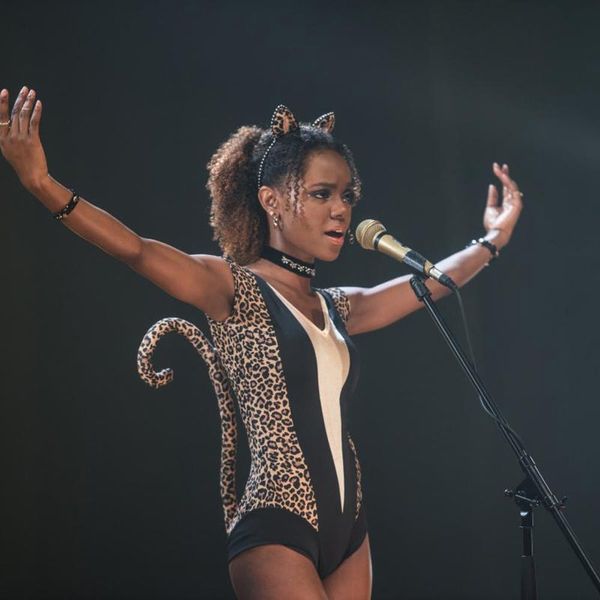 Forget #HotArchie — it’s Ashleigh Murray who plays the coolest role in The CW’s Riverdale. Murray plays Josie McCord, one-third of the pop culture sensation Josie and the Pussycats. In many ways, Josie is the voice so many of us need right now. She’s not just a female voice — she’s a black female voice; she’s confident and talented, and she doesn’t let anyone push her around. She doesn’t even care about dating guys. And she’s following her dreams and is hella confident about it.

For five episodes, Riverdale has slowly revealed more about the characters of its small town, but last night, Josie finally got her due in the Pussycats-focused episode, “Faster, Pussycats! Kill! Kill!” And Murray, who recently talked with Brit + Co about the episode, is more than ready for fans to see the REAL Josie. “It’s funny, because I have so much history of who I believe Josie is to me in Riverdale that we haven’t been able to display yet,” she revealed. “I’m like, yeah, I could talk about Josie for days! You don’t see all of it, but it’s there!”

Read on for more of our chat with Murray, and find out how excited she was to don the iconic Josie and the Pussycats costume on stage (spoiler alert: Obvs, the answer is very).

B+C: The Archie Comics have been a part of our pop culture world for so long and have gone through so many evolutions, but in their own way, so have Josie and the Pussycats. When you were creating Josie, did you do any research or draw on anything from the comics over the years? Or did you just really focus on making Josie your own through your own experiences and ideas?

It’s a little bit more of the latter, because I’m incredibly familiar with the comics. I’ve been familiar with them ever since pre-2002, I want to say. Then when the graphics changed — they were becoming more of a graphic novel format as opposed to the digest that the die-hard fans are used to, and I was a part of the digest movement — I kind of fell off… so I took what I grew up loving and combined it with what I thought Josie should be through the sides and just through how I always saw her, and went from there.

B+C: You had that one exchange with Archie in a recent episode, where Archie kind of got put in his place with his music. But the way the exchange happened was very real, and I think that was such an important thing to see on television.

First of all, I want to appreciate you for saying that, because that is how we want to come across. I want people to be able to receive that scene in the same way you have, because that’s what it’s all about. It’s not aggressive, it’s not “here, have this plate of your daily ‘you’re a horrible person.'” There are people who are extremely sensitive to being too politically correct and sometimes, in some ways, in some situations, I understand that. But this is not what that’s about. And that scene was very important to me because we are seasoned for so many things. And it’s not only teenagers who are hearing this, it’s everyone. It’s the climate of our world, and it’s become more transparent over the past four years. So being able to have these conversations, and even giving kids today who are going to school, who are dealing with these same issues, a format of how to address those situations and how to have those conversations in a peaceful manner so that everyone is listening and everyone is receptive… it was one of my favorite scenes to shoot.

B+C: Can we talk about last night’s episode? Because I know you get to wear the original costumes. How excited were you about that?

Oh my god, you have no idea! I’ve been nerding out about this. I’ve been inside Roberto’s ears for like, five months, begging begging begging if I could wear the original costume. I wanted to wear it to Comic Con — no lie, I asked about it when I found out that we might be going this past summer. When we got the confirmation, I was like, “So, can I go dressed up or not? Because I kind of want to run the floors with the full cat outfit.” Oh my god, I loved that outfit… it was a little tight in the thigh part area. [laughs] It was so great; I was so excited.

B+C: I think everyone is really excited for this episode because we finally get to see more of Josie, so what can you tease for readers about what they’re going to see?

You’re going to get to meet Josie’s dad. You’re also going to find out how she got her name, and you’re gonna see how she deals with the fallout of her friendship between Valerie and herself, and how they come back from that. It’s a really intense episode. My favorite thing is the family dynamic. I view it not only as the world seeing who Josie is and why she is the way she is, but the audience is also almost like Archie, because he’s the one person in Riverdale other than Valerie and Melody who knows who Josie is, and he’s getting to see this layer of the cake and oh my god, this is why you are Josie McCord.

B+C: We recently met Cheryl’s parents and got a look into her life at home, which really gave us a lot of insight into who she is and why she acts the way she does. And we’ve already seen the inner lives and parental relationships of Betty, Archie, and Veronica. So I’m really excited that we’re going to get that for Josie, also.

It’s such a beautiful transformation, and I really hope that we’re lucky enough to go to season two so that we can continue to explore that. Really, this entire season, aside from the murder mystery, we’re hoping to build out this world and give everybody a chance to see what each of these character’s lives are like. Kind of like the way Pretty Little Liars and Gossip Girl was — they had all these different storylines and all these different characters, and I think what makes it work the most in our show is that there’s always a through-line that connects us in some way. We’re always coming back to each other. It’s not just us having these crazy lives with our parents. So I’m very excited for the world to take a look at Josie McCoy’s chapter in Riverdale.

B+C: Now that the show has found its feet, have you started hearing from fans about how they feel about the character?

I have. And it’s probably biased, because I don’t look for anything negative. [laughs] I read certain things, certain comments, and reviews about the show because I think it’s important to see if there’s something people are disliking and if there’s something we can work on. But the things that I have seen so far in regards to Josie have been very positive. I get a lot of comments about people being inspired, being very happy that there is a representation of how they see themselves. We also have a few fan accounts on Instagram, and there are a couple who have been die-hard followers since the very beginning, and one of my favorites is this guy Peyton Behrman. And he’s a huge, huge Josie and the Pussycats fan. And he posted something not too long ago, and it was really really moving. He would talk about how his friends would come to him and say, “Why are you so all up in arms about these girls? They’re just these people on a TV show, it doesn’t matter, you’re making them all over your profile, why is it so important to you?” And he talked about how it’s more than just these three girls on this show; it’s about that he’s always loved Josie and the Pussycats. And his favorite character was Melody. And Melody is the blonde girl with blue eyes, and he never felt like he could play Melody. It was never presented to him in a way that he could relate to. And it didn’t have anything to do with the fact that Melody was a girl, it was just that he couldn’t relate to blonde hair and blue eyes. And now that he has this new representation of Josie and the Pussycats, he feels like he can relate to them more, and express himself in a way that he couldn’t before. And I think it speaks volumes to what we’re doing. It was definitely one of the most moving posts that will stay with me. Because that’s why I do it — I don’t do it for myself. It does make me happy, but I do it because I want to inspire people in a way that I was inspired.

B+C: What have you learned from playing Josie?

The amount of confidence that you really have to have in yourself, even if others don’t. And that’s something I deal with every day. I’m a fairly confident person; I’m very aware of my strengths and very aware of my weaknesses, and I’m conscientious about the choices that I make. But sometimes I get hesitant and second guess myself. Even going into this week, I’ve been so excited for this episode so I can watch it with my friends and it’ll be this really great moment… and I am terrified. And I think about, okay, think about Josie. Josie would be like, “Yeah, this is happening, and it’s what you wanted, so go out there and f****ing enjoy it!” And that’s something that somehow, someway… I’m able to give myself 100 percent to that confidence that she has when the cameras are rolling. And I try to remind myself, what would Josie do?”

Are you looking forward to seeing more of Josie’s story? Let us know on Twitter @BritandCo.

Andrea Towers
Andrea Towers is an entertainment writer whose work has appeared in Bustle, Variety, Paste Magazine, Mashable, and more. She loves celebrity life, coffee, superheroes, and crying into her wine glass over really good programming. She lives in New York, and was previously a writer and editor at Entertainment Weekly. You can find more of her pop culture ramblings and thoughts on Twitter at @_atowers.
Pop Culture