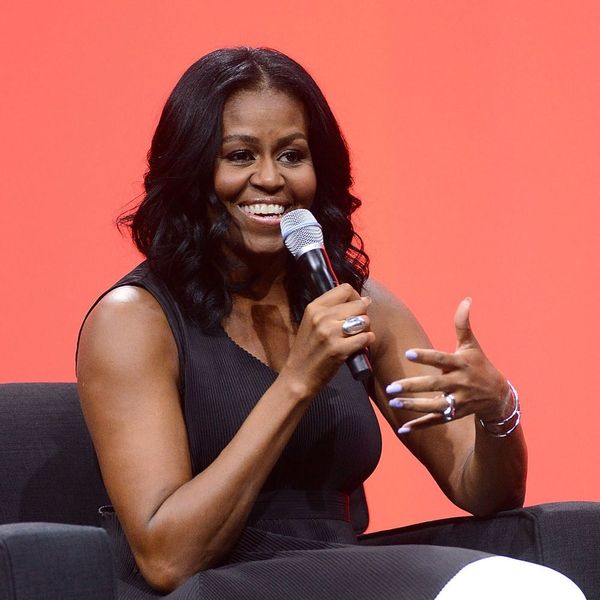 Michelle Obama has returned to the spotlight after a post-White House, three-month vacation with her hubby to Hawaii, Necker Island, and the French Polynesian Islands. By the looks of it, even though she’s been away for a while, her style certainly hasn’t suffered.

The former first lady did her first speaking engagement yesterday, returning to the stage at the AIA Conference on Architecture 2017 in Orlando, Florida to speak on her time at the Chicago chapter of Public Allies, a program with the goal of helping underserved young people enter higher education and gain successful careers. Obama was once the Executive Director of the Chicago program. The former first lady also addressed her goals (which don’t include running for office), and more.

The Yale alumna stepped out in a Lafayette 148 New York’s Celia Sleeveless Amorous Pleated Maxi Dress ($548). She paired the casual, belted dress with black sandals and her signature wavy bob. To add an extra oomph of fun to her look, Obama chose a pretty lilac shade for her mani.

As for why she won’t be running for public office? The answer lies with her daughters Sasha, 15, and Malia, 18. “It’s all well and good until you start running, and then the knives come out,” she said at the event. “Politics is tough, and it’s hard on a family … I wouldn’t ask my children to do this again because, when you run for higher office, it’s not just you, it’s your whole family.”

Well politics or not, it’s awesome to see Obama back to work inspiring minds (and closets) everywhere.

What’s your fave Michelle Obama look? Tell us at @BritandCo!