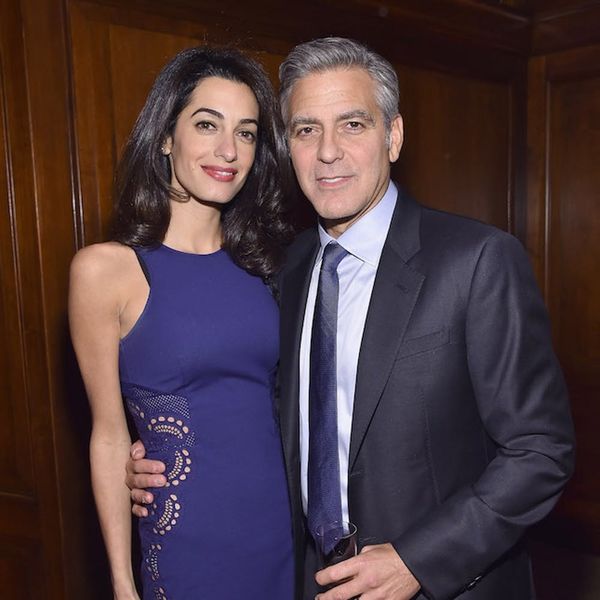 George opens up about becoming a first-time dad and North West gives us the most relatable meme in this morning’s top news tidbits. Check those and more out below!

1. Since George and Amal Clooney aren’t exactly the kind of couple who would announce their pregnancy — much less their sappy feelings on it — via Instagram or something similar, we haven’t heard many updates from the pair on their pending, well, pair. In a recent interview on Laurent Weil’s Rencontres de Cinema, George finally spoke out on how he’s feeling. “It’s going to be an adventure,” he said smiling. “We’ve sort of embraced it all with arms wide open.” George also revealed that when he and Amal told their friends they were expecting, “it got really quiet, and they all just started making baby crying noises” before breaking out laughing. VERY FUNNY, GUYS. (Photo via Mike Coppola/Getty)

2.Milo Yiannopoulos’ book deal has been cancelled. The controversial Breitbart News editor announced on Monday that Simon and Schuster would not be publishing Dangerous, as the publisher also released a statement saying the decision was made “after careful consideration.” The book cancellation as well as speaking gig cancellations come after Yiannopolous appeared to make comments about pedophilia in a recent interview. Milo shared the news on Facebook with a curt “They cancelled my book,” which itself immediately became a meme among those happy to hear the news. (Photo via Drew Angerer/Getty)

To the loves of my life...my one and only Valentine, Papa @maksimc ...I love you and our little Shai more than ever ❤ This is without a doubt the most special and significant Valentines Day for me #happymom #myeverythings XO

3. Peta Murgatroyd shares the sweet meaning behind her new baby’s name.Dancing With the Stars’ Peta Murgatroyd and Maksim Chmerkovskiy welcomed their first baby in January, and in a new post on her blog, she reveals the meaning behind his name. “Naming a baby — who will one day be an adult out in the world — is hard,” she said, which is so totally true. “It took months and months to find a name that both Maks and I loved and kind of embodied what he means to us.” Eventually, they landed on Shai, which is pronounced “shy” and means “gift” in Hebrew. “It’s a perfect fit because from the very beginning, we felt like this little life we made was the most precious gift God could grant us.” Too cute.

4. North West’s “thrilled to party” face is our new favorite meme. Kim Kardashian recently caught North and cousin Penelope Disick sitting calmly at a party, and North’s forced smile inspired the sarcastic “thrilled to party!!” caption that we’ve now decided is the official “all of us” meme of 2017.

5. The girl who gave us “eyebrows on fleek” is crowdfunding her own cosmetics line. We love when we find those makers and creators whose crowdfunds deserve our hard-earned dough, and this might be the best one yet. Peaches Monroee, the creator of the “eyebrows on fleek” phrase, has launched one to fund a cosmetics and hair line. “Everyone has used the phrase/word but I haven’t received any money behind it or recognition,” she writes on the campaign page about the viral catchphrase. “But for the most I want to start a cosmetic line and hair line; But I don’t have any money to do so.” Peaches — real name Kayla Lewis — is currently enrolled in college and wants to study nursing as well. Take our money! (Image via Kickstarter)

6. Quote of the day: “I want to focus on what I am, who I am and how I’ve been without any distractions. I want to love. I want to enjoy life.” Former Partridge Family star David Cassidy announces he has been diagnosed with dementia and that he will stop touring to focus on his health.

Have you ever had to take time off work for health reasons? Let us know over @BritandCo.