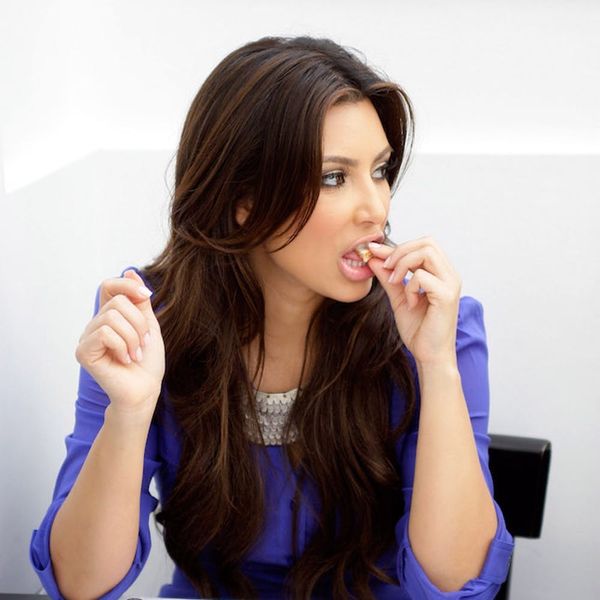 You’ve already made it to the middle of the week, so give yourself a pat on the back. While you’re at it, check out Kim K’s go-to fast food items, a potential secret White House Twitter account plus more fun stuff in today’s Buzziest news stories.

1. Kim Kardashian’s list of favorite fast food items is drooooolworthy. If you’ve been paying attention to Kim’s Snapchat, you’ll know she’s currently on a strict Atkins diet, so it’s possible she’s been dreaming of indulging in forbidden foods. But instead of heading straight for a drive-through, she’s channeled the cravings in a more productive way: by letting her fans in on all her favorite fast food treats. “I go very rarely, but OMG I love it so much when I decide to indulge,” she writes on her website. Her McDonald’s go-to is ALWAYS a small fries, plus McNuggets or a cheeseburger. At KFC, she gets the extra-crispy chicken wings and a biscuit with honey. A burrito bowl and a Diet Coke (with LOTS of ice, natch) is her standard Chipotle order. She splits her Taco Bell order into one hard and one soft taco, and at In-N-Out, she gets a cheeseburger with fries, plus a vanilla shake. PHEW. If you’re also trying to cut back on the fatty stuff, live vicariously through this list. But be warned: It 100 percent definitely will cause some serious salt cravings. (Photo via Chris Hondos/Getty)

2. Does Sasha Obama have a secret Twitter account? During a campaign stop with Hillary Clinton, President Barack Obama was commenting on Donald Trump’s, um, prolific tweeting habits and said that just because Trump can fill 140 characters many, many times a day doesn’t mean he’s suited to be President. “Everybody can tweet, but nobody actually knows what it takes to do the job until you’ve sat behind the desk. I mean, Sasha tweets, but she doesn’t think that she thereby should be sitting behind the desk,” Obama said, and Twitter went CRAZY. The White House declined to provide any further info, and while we’ll go ahead and assume that her account is not likely public, please join us in refreshing this search until it’s uncovered. We just wanna throw her a like or maybe an RT!

3. Chloe Grace Moretz and Brooklyn Beckham continue to be TOO CUTE. In a new Instagram post, these two take their fitness class meet-cute a step further, doing a boxing workout together. The public reveal of their relationship was sort of the opposite of that other new Hollywood couple (cough cough, Hiddleswift): relatively private, low key and sweet as a love note. These two just might be the real deal.

When there's literally so much love around your only option is to make a room for all of your love banners & sing love songs to each other. @taylorswift we LOVE you! Kudos to @teddysphotos for the photobomb of the year.

4. Taylor Swift actually took time out of her own Fourth of July love-fest to celebrate her friends’ love too. We learned a few days ago that one of Taylor’s OG BFFs Abigail got engaged, and we’re wondering if the eventual wedding might see Taylor back on Maid of Honor duty. If her grand gestures of celebration for her pals are any indication, she’s certainly making a play for it! In a room full of celebratory banners for Abigail and Matt AND Ed Sheerhan and his girlfriend Cherry (nice photobomb by the way, guys), the crew jammed and sang songs all night. The icing on a pretty amazing weekend-cake!

@ayydubs this is how I came out yesterday lolol pic.twitter.com/UqStjeZRyF

5. This teenager came out to her family at Disneyland and it was AMAZING. 16-year-old Gina from California recently told Buzzfeed that she’s known she was gay for about a year and was trying to think of the best way to tell her family. The logical answer? Splash Mountain. “I am not the type of person to have a deep, sit-down conversation, so I wanted to tell them in a lighthearted and fun way,” she told Buzzfeed. Her family was fully supportive and the public reactions have been too. TEAR. (h/t Buzzfeed)

6. Quote of the day: “I happened to be on Skype with our Executive Producer Julie Snyder, and both of us did exactly the same involuntary thing of sucking in our breath and then putting our hands over our mouths. We weren’t so much shocked because of the legal arguments, but because it was such a long shot.” Serial host Sarah Koenig reacts to Adnan Syed’s new trial.