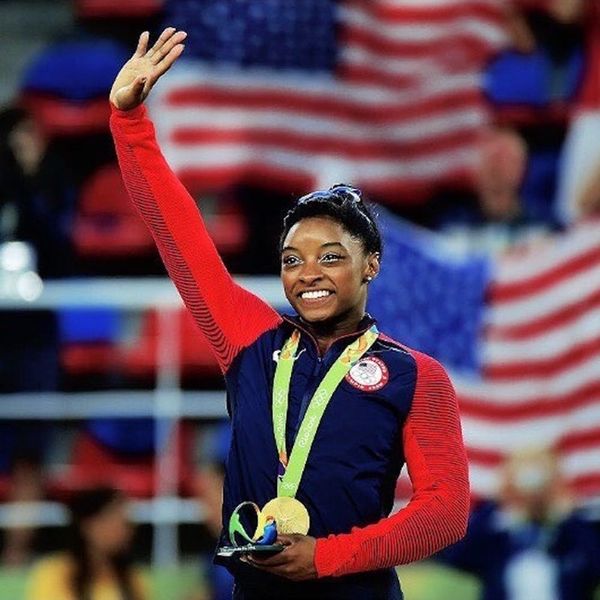 There’s so much fitspiration on social media right now that it’s easier than ever to feel motivated to hit the gym. From weightlifting workout ideas to cute activewear outfits, who better to get fitspo from than superstar athletes on Instagram? Clearly, they’ve worked crazy hard to become the best of the best, and that’s nothing short of mega-aspirational. This month, Instagram released a list of their most popular female athletes on the platform (AKA those with the most followers), and the results are totally inspiring… and a bit surprising.

1. Ronda Rousey: Ultimate Fighting Champion star and 2008 Olympic bronze medalist in judo, Ronda at times has been a controversial figure (remember the DNB tee?). But there’s absolutely no doubt that she’s a badass. Clocking in at 8.9 million followers, she’s got some major influence. She uses her account to share everything from training photos to what she’s listening to while she’s stuck in a traffic jam. Celebs, they’re just like us.

Last night... Before the ambush. #smackdownlive

2. Nikki Bella: With 5.1 million followers, Nikki is seriously killing the Instagram game. Probably the most popular female wrestler in the WWE franchise, her pictures show us that she’s also into fashion, beauty and barre classes.

3. Serena Williams: Serena is one of the most decorated athletes in tennis history, so it makes sense that she also ranks near the top of this list. Her feed is a great mix of workout pics, info on issues she supports and G-L-A-M-orous selfies and magazine photo shoots. Plus, she expertly responds to haters, which makes us love her even more.

4. Alex Morgan: Soccer player Alex Morgan is not only famous for her skills on the field but also for her insanely strong physique. She’s always been a fan favorite and posts not only soccer pics, but images of her daily life too.

Another glamorous gym pic!!! Got my workout in and now I'm ready to get my snack game on for #TotalBellas in 2 hrs!!! You won't want to miss this episode! 😬 OH my family!! 🙈👀 tonight at 8pm only on E! #nowkickingpregnancysbutt 💪🏽

5. Brie Bella: The pro wrestler (yep, she’s Nikki’s twin sis) is currently pregnant with her first child, but that’s not stopping her from getting her sweat on and rocking adorable active outfits while she’s doing it.

When your love brings you flowers to make you smile. ❤️

6. Paige: So yeah, it looks like these wrestling ladies are pretty popular — and with good reason. They’re strong, kick butt in the gym, give great workout tips and wear some seriously cute fitspo fashion. What more could you ask for?

pre workout before the show. well except danell. solving a rubics cube instead! but HEY LA! 💙 hope to see you all at our shows today! ☺️ #kelloggstour

8. Simone Biles: Frankly, we are a little surprised that Simone isn’t higher on this list, mostly because she won five Olympic gold medals this year in Rio. Simone documents her antics with her friends, fam and other pro athletes, all with her signature playful flair.

9. Sania Mirza: India’s star tennis player is currently ranked number one in women’s doubles, but that’s not the only thing that makes her awesome. Head on over to her profile for some of the coolest tennis gear and most gorgeous Indian fashion you’ve ever seen. Trust us.

10. Natalya: One of the most inspiring things about all these wrestling ladies? The hardcore workouts they document on their Instagram accounts. Looks like Natalya is a front squat pro, which is no easy feat.

Shoutout to all the boys from 5th-9th grade who made fun of me for being "too strong". Thanks for forcing me to learn to love myself and my body. My muscular arms that were considered weird and gross when I was younger have made me one of the best gymnasts on the planet. Don't ever let anyone tell you how you should or shouldn't look. There is no such thing as a perfect body type. I love being a part of the #PerfectNever campaign. #GirlPower #Supporteachother

11. Aly Raisman: As part of Reebok’s #PerfectNever campaign, Aly shared on her account that she used to get made fun of for being “too strong.” Eventually, she learned to love her body and said that her super muscular arms, which were one of the things she was shamed for growing up, have been crucial in making her one of the best gymnasts in the world. To that, we say right on.

12. Maria Sharapova: Since Sharapova is on hiatus from tennis competitions, she’s been trying out all kinds of workouts, like boxing and celebrity favorite SoulCycle. You might be a little envious of her jet-setter lifestyle, but it’s still totally fun to live vicariously through her travels.

When you can’t see the haters online because you’re blocking them out with your winnings. 💁🏽😍 How do you say @Later_Haters ? Tell me in the comments below! ✌🏽️#LaterHaters

13. Gabby Douglas: As someone who experienced an undue amount of criticism during this year’s Olympic Games, Gabby has definitely bounced back and handled the not-so-nice things people were saying about her with grace and a pinch of humor. Just take this photo of her “blocking out the haters” with all her gold medals, for example. Well played, Gabs.

14. Alana Blanchard: A pro surfer and model, Blanchard is fun to follow for action shots like this one, especially when you need a break from the gray days of winter. Also, if you’re in the market for some new swimsuits, scope her account for some awesome inspo.

Woohoo! Was able to get a silver on beam today!🙈 Thanks @maggiehaney26 for pushing me to my best in the gym. Without your help, I couldn't have performed the way I did today😊❤️

15. Laurie Hernandez: The gold medalist’s infectious smile hasn’t gotten any less charming since she first came into the spotlight over the summer. If you’re looking for a ray of sunshine on the reg, give Laurie a follow. You won’t regret it.