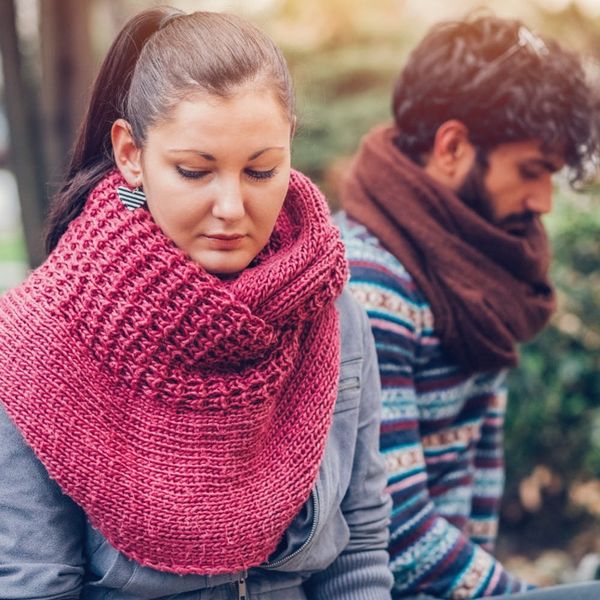 We often associate winter and the holidays with cuffing season: the time of year when everyone wants to find someone to snuggle with. It’s tricky to be your best single self during this time of year, but many people in relationships would say it’s a hard time to be tied down too. Because the holidays are widely considered to be engagement season, they can be a stressful time for couples due to the pressure this puts on their relationship. Additionally, couples’ relationships are on display during the holidays, and many partners find themselves dealing with their S.O.’s family more often than usual. For these reasons, being in a relationship during this time of year brings its own unique set of challenges — and the numbers prove it.

In 2010, data journalists David McCandless and Lee Byron analyzed thousands of Facebook relationship statuses and posts and found that breakups began to increase after Halloween and rose dramatically two weeks before Christmas. In an ABC News article, Byron theorized that this time of year has high levels of breakups because of “end-of-the-year reflections or the thoughts of everyone heading home for the holidays.”

A recent AskMen poll seems to support the previous research. The poll asked 668 readers which holiday would be the most reasonable to dump a significant other and showed that ’tis the season for couples to make it or break it. TBH, no one should break up with anyone on a holiday, but love (or lack of it) is a mysterious thing. If you’ve made it through Thanksgiving as a couple, congrats — but keep an eye out for these upcoming dates.

1. Thanksgiving: Almost half of the respondents said that Thanksgiving was the most acceptable holiday to break up with someone. Apparently, this phenomenon is known as Turkey Dumping or Turkey Dropping: a cyclical breakup cycle that happens to most first-year college students as they end things with their sweetheart during their first break home (although it’s not limited to only college students). Thanksgiving is usually considered the beginning of a holiday season, so if you’re unsure of a relationship, it makes sense to nip it in the bud before attending months of possibly awkward family events together.

2. New Year’s Eve: Thirty-one percent of men said that New Year’s Eve is the most tolerable option for ending things with a boo, bringing new meaning to New Year, New (Single) You. The jury is still out on whether it’s okay to let someone down before or after midnight.

4. Their Birthday: Thankfully, only five percent of respondents would consider breaking up with their significant other on their birthday. Talk about worst birthday ever. Have a heart, guys!

5. Christmas: Less than one percent of men said that a Christmas breakup would be viable. While holiday breakups seem to be a trend, nobody seems up for dumping their boo on the climax of the holiday season.

Would you ever break up with someone on a holiday? Let us know @BritandCo!