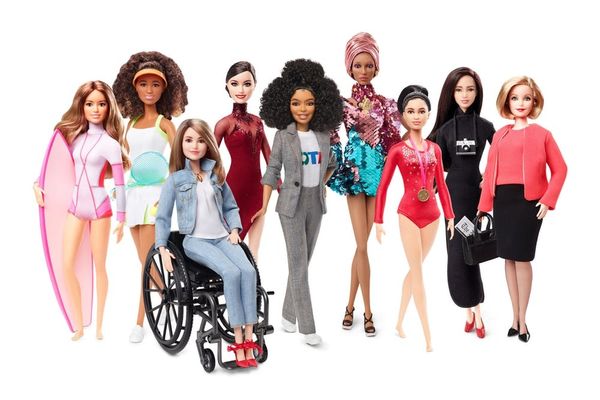 It’s a Barbie world, and we’re just living in it. Days ahead of International Women’s Day, Mattel has announced nine new Barbies in celebration of the doll’s 60th anniversary. The dolls honor several fierce female role models from all different fields and countries, adding to Mattel’s already-diverse line of “Sheroes.”

Among the newest members of the “Shero” club are grown-ish actress Yara Shahidi (center), who launched the Eighteen x 18 movement to empower and engage young voters; activist and model Adwoa Aboah (fourth from right), who runs an online community called Gurls Talk, for women to discuss issues such as mental health and education; biracial tennis player Naomi Osaka (second from left), the reigning US and Australian Open champion; and Australian journalist Ita Buttrose (far right), the founding editor of the women’s magazine Cleo.

“For 60 years, Barbie has championed girls, inspired generations to believe through make believe and showed them that they have choices,” Lisa McKnight, general manager and senior vice president for Barbie, said in Mattel’s announcement Wednesday. “With more than 200 careers, six runs for president, and a trip to the moon before Neil Armstrong, Barbie continues to evolve to be a modern, relevant role model for all ages. The Barbie brand believes girls should never know a world, job, or dream women haven’t conquered. Through our global platform, we are igniting a movement to help close the Dream Gap and further establish Barbie as the ultimate girl empowerment brand.”

To that end, Barbie will donate one dollar for every doll sold in the US from now until November (up to $250,000) to the Mattel Children’s Foundation. The money will go toward the Barbie Dream Gap Project Fund, which aims to close the gap between girls’ dreams and limiting self beliefs.

Mattel has spent the last several years redefining who and what Barbie is, adding more inclusive body types, skin tones, and occupations to the collection. For tennis pro Osaka, seeing herself reflected in the doll has been life changing.

“It’s a really big honor,” she told People about the launch. “I’ve played with Barbies when I was a kid, and I think it’s a bit of a surreal experience to have the opportunity to have a Barbie that looks like me. … I hope that girls feel inspired, and I hope they somehow see a lot of possibilities when they look at all the dolls.”

RELATED: 14 Celebrities Who Have Been Immortalized With Their Own Barbie Dolls

Kat Armstrong
Kat has been a writer, social media maven and mom for longer than she's willing to admit. She's also spent time in front of and behind the camera, interviewing celebs, politicians and acting as a producer for fashion and artistic photography shoots. When she isn't writing for various orgs and publications, she's hanging with her kids, husband and French Bulldog, Peter, in Toronto, Canada.
Empowerment
More From Empowerment