14 Celebrities Who Have Been Immortalized With Their Own Barbie Dolls 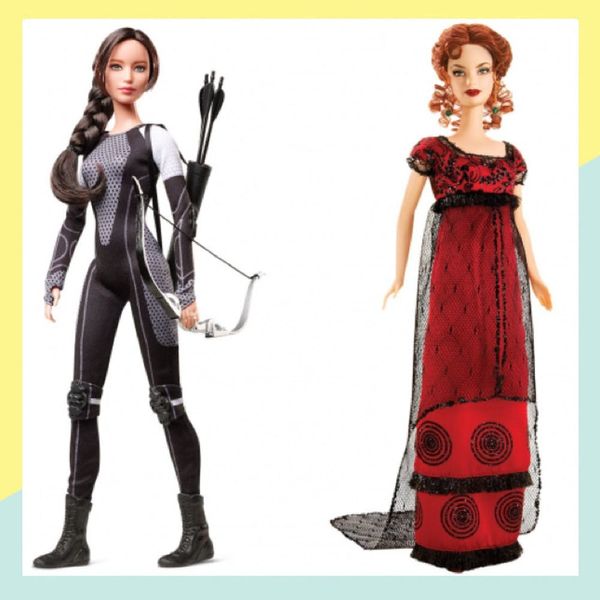 Love her or hate her, Barbie is a pop culture icon. And when a celeb crosses a milestone like getting her own Mattel doll, it's basically on par with getting a star on the Hollywood Walk of Fame. Click through to see which lucky stars have been forever immortalized in the form of their own figurines.
Kate Winslet: The British star got her most iconic character, Rose DeWitt Bukater from Titanic, immortalized with this gorgeous collectible Barbie. (Photos via Anthony Harvey/Getty, Mattel)
Fan Bing Bing: She's one of China's biggest film stars (US audiences might know her as Blink in X-Men: Days of Future Past), so it's no surprise that Mattel crossed the Pacific to create a Fan Barbie in her likeness. (Photos via Dominique Charriau/Getty, Mattel)
Mindy Kaling: While we love her in The Mindy Project, Kaling's character in Ava DuVernay's much anticipated A Wrinkle In Time, Mrs. Who, was the one to be commemorated in doll form. (Photos via Paul Archuleta/Getty, Mattel)
Gabby Douglas: With not one, but THREE Olympic gold medals to her name, the 22-year-old gymnast has won a spot on Mattel's shelves. (Photos via NIcholas Hunt/Getty, Mattel)
Oprah Winfrey: There's been a hole in our lives in the shape of an Oprah Barbie doll, and luckily, the 64-year-old actress and media mogul is finally getting one, modeled after her A Wrinkle In Time character, Mrs. Which. (Photos via Amanda Edwards/Getty, Mattel)
Robin Wright: You can collect your own miniature of the butt-kicking general Antiope, played by the badass Robin Wright. (Photos via Donato Sardella/Getty, Mattel)
Kristen Stewart: While the 27-year-old actress' style has gone through multiple transformations since her Twilight ingenue days, Stewart's likeness as Bella Swan will be frozen in time with this Barbie doll. (Photos via Andrew Toth/Getty, Mattel)
Natalia Vodianova: This miniature of Russian supermodel Natalia Vodianova is definitely a collector's item — and it looks ready to strut down a runway. (Photos via Derren Gerrish/Getty, Mattel)
Jennifer Lawrence: The Hunger Games franchise grossed over $2.9 billion worldwide, so it only makes sense that Mattel created a figurine of Katniss Everdeen, played by the talented Jennifer Lawrence. (Photos via Phillip Farone/Getty, Mattel)
Gal Gadot: Wonder Woman was one of the biggest films of 2017, and Mattel created their response to the typical action figure with a likeness of the superhero herself, played by Israeli actress Gal Gadot. (Photos via Frazer Harrison/Getty, Mattel)
Reese Witherspoon: Witherspoon's character in A Wrinkle In Time, Mrs. Whatsit, might have just received her own Mattel stamp of approval, but it's not the first time the veteran actress has been given her own Barbie; her Legally Blonde character Elle Woods fittingly has her own figure. (Photos via JB Lacroix/Getty, Mattel)
Ava DuVernay: Long before the stars of her film A Wrinkle In Time were given their own dolls, director Ava DuVernay had already broken ground with her Barbie. It was created in 2015! (Photos via Chris Delmas/Getty, Mattel)
Gigi Hadid: Gigi Hadid can add Barbie doll to her long list of modeling accomplishments. The 22-year-old supermodel's collaboration with Tommy Hilfiger was commemorated with her own mini-me. (Photos via Bryan Bedder/Getty, Mattel)
Emma Watson: We're chalking this one up as an honorable mention because it's *techinically* not a Barbie doll as it was made by Disney in honor of the live-action Beauty and the Beast remake, and not Mattel. When the doll was first released, it made a splash in the headlines for... not looking like Watson at all. (Photos via Laurent Viteur/Getty, Disney)

Which doll bears the most resemblance? Tweet us @BritandCo!

Which doll bears the most resemblance? Tweet us @BritandCo!

Kimberly Wang
Kimberly Wang writes about all things pop culture, tech, style, and beauty. She's a Bay Area transplant and has an MFA in Creative Writing from Columbia University. On a sunny New York day, you can find her hanging out with her mini schnauzer Isabelle Jellybean on a blanket in Central Park.
Celebrity
Celebrity News
Celebrity toys