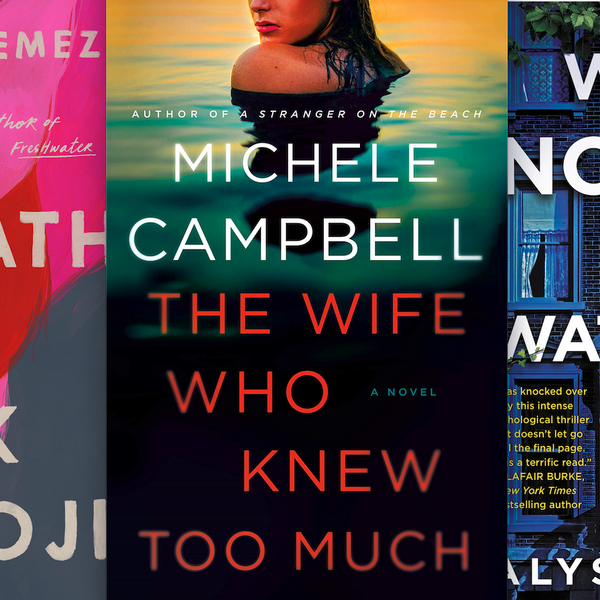 Feel like you've watched Netflix's best crop of shows and movies? Sometimes a great book can be as good or even better than your favorite series. We've put together a dozen new books, from steamy romances and magical tales to thrilling mysteries and touching immigration stories, to binge-read this season. Give your eyes a break from the screen and flip a page to these amazing stories.

1. Take A Hint, Dani Brown by Talia Hibbert ($16): PhD student Dani Brown only wants to focus on her schoolwork and career. Romance is out of the picture. Until rugby player turned security guard Zafir Ansari swoops in to save her from a fire drill gone wrong and the video of the rescue goes viral. Everyone on the internet is rooting for the two of them to be together. When Zafir asks Dani to play along and fake date for the publicity, she agrees, but she has ulterior motives, and that's to seduce the big hopeless romantic.

2. Life and Other Shortcomings by Corie Adjmi ($17): These short stories take the reader from New Orleans to New York City to Madrid, from 1970 to today. The women in these twelve stories are all different—some work, some are married, some are divorced—but they all struggle with what it means to be a woman in a relationship in different cultures and eras. Perfect for the #MeToo movement, this collection is an honest cautionary tale about the female experience.

3. When No One Is Watching by Alyssa Cole ($17): Sydney Green's Brooklyn neighborhood is changing. Condos are being built, For Sale signs are showing up, and her lifetime neighbors are leaving. When she decides to start a walking tour to keep her community together, Sydney finds an unlikely assistant in her new neighbor Theo. As the two dive into the history of their neighborhood, they discover there may have been a "deadly" push to revitalize the area. Is there a conspiracy going on? Are people really leaving the neighborhood, or are they disappearing? When No One Is Watching is an intense psychological story that will grab hold and not let go.

4. The Wife Who Knew Too Much by Michele Campbell ($28): If you enjoy a murder mystery with twist and turns, you'll love The Wife Who Knew Too Much. Divorcee Tabitha Girard gets another shot at love when fate brings her old flame Connor Ford back to their New Hampshire hometown. While Tabitha is barely making ends meet as a waitress, Connor has married a much older widow, heiress Nina Levitt. When Nina takes her own life, he's free to finally marry Tabitha. But as Tabitha falls deeper into the dark glamour of a life she isn't ready for, she'll find out that what a wife knows can kill her.

5. You Exist Too Much by Zaina Arafat ($26): In vignette writing, a Palestinian-American girl goes from innocent teen to DJ to aspiring writer. Flashing between New York, Jordan, Lebanon and Palestine, we follow the protagonist as she navigates her first romantic relationship. But as she becomes obsessed with other people, destructive behavior lands her in The Ledge, a treatment center for those addicted to love. There, she will deal with her traumas and discover who she is. Culture, religion and sex are at the forefront of this captivating story as the main character grapples to find her place in love and in home.

6. We Came Here to Shine by Susan Orman Schnall ($17): Susan Orman Schnall's We Came Here to Shine is an inspiring story of two driven women during the 1939 World's Fair. Vivi Holden and Maxine "Max" Roth both end up at the World's Fair unintentionally after a tough break in their career plans. Instead of interning at The New York Times, Max ends up at the daily World's Fair publication, where her male counterpart writes the articles and she manages the schedule. And instead of Hollywood, Vivi ends up at the fair's Aquacade water ballet, where she has four days to learn the intricate swimming sequences to perform in front of thousands. When Vivi and Max become friends, they devise a plan to help their careers—with a few unexpected twists along the way.

7. Transcendent Kingdom by Yaa Gyasi ($28): Gifty has had her share of loss and suffering—her mother is suicidal and her brother overdosed on heroin. Now Gifty is studying depression and anxiety in lab mice at Stanford University School of Medicine, where she is determined to uncover the science of why there is so much suffering around her. She is also drawn back to her childhood faith and the church in which she was raised to search for salvation. Science, religion and her faith intertwine in this emotional and powerful story about a Ghanaian immigrant family.

8. All the Right Mistakesby Laura Jamison ($17): When Heather publishes a book on advice for women highlighting the mistakes her four college friends have made, there are repercussions. She's shared personal information about work, parenting, marital issues and more, and while her friends are hurt, they all wonder what would have happened had they followed Heather's advice. The reality is that life is messy, but it's also joyful. Through their differences, can the women embrace the idea that the ways they handle obstacles in life is more important than the choices they have made.

9. A Spell for Trouble by Esme Addison ($27): If you're intrigued by a family of witches, you'll dive headfirst into Esme Addison's debut novel, A Spell for Trouble. Forbidden by her father to return to Bellamy Bay following her mother's death, Aleksandra Daniels finally accepts an invite from her estranged family to help with the herbal apothecary family business. When her aunt Lidia is arrested following a fatal poisoning, salacious town gossip and rumors of witchcraft abound. Alex decides to investigate, uncovering family rivalries and the truth about her own ancestry.

10. The Lost Girls of Devon by Barbara O'Neal Barbara ($15): O'Neal's novel The Lost Girls of Devon takes readers on a journey of multi-generational hurt and growth. When Zoe's grandmother's friend and caretaker goes missing, Zoe Fairchild and her fifteen-year-old daughter return to the village of Devon to help. But Zoe's got wounds from her birthplace, and does not look forward to seeing her estranged mother or her ex-boyfriend. When the four Fairchild women reunite, their frail relationships will be tested in unexpected ways. A mysterious tragedy in the village further complicates things as the women look for ways to heal themselves and their relationships.

11. The Death of Vivek Oji by Akwaeke Emezi ($27): Vivek Oji is a mysterious and gentle child being raised by his overprotective mother and a distant father in southeastern Nigeria. Vivek has moments of blackouts and disconnection between himself and his surroundings, causing difficulty in his life. His closest friend is his high-spirited cousin Osita. When Osita begins to realize Vivek is in crisis, and before she can do anything, an act of violence tears the family apart and ends Vivak's life. Unforgettable characters in this dramatic story will remain in the minds of readers long after the book has ended.

12. Kiss My Cupcake by Helena Hunting ($16): When the grand openings of two specialty shops coincide with each other, it's a race from the start to get the most business. Blaire is thrilled to open her cupcake and cocktails shop, but hadn't expected super swoony Ronan Knight to open his sports bar the same day. As the battle to win new customers escalates, a chemistry between the two begins to bloom. And when a bigger threat shows up in town, Blaire and Ronan may need to call a truce and combine their efforts to work together to keep their businesses.

What are you reading these days? Share with us @BritandCo!