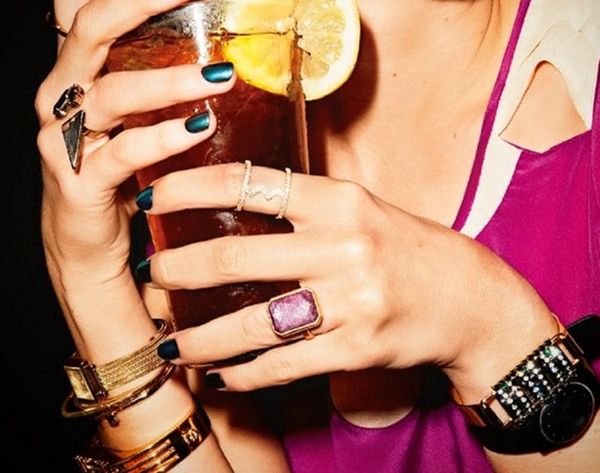 The fairest (and our favorite) wearable in all the land is about to get a little bit more badass. So if any of you who got the 2 Cool 4 School, Angela Chase option when you took this quiz are planning a tech-sessory splurge any time soon, we think the latest in the Ringly line will fit on your finger perfectly.

You’ve already fallen in love with Stargaze, Daydream, the already sold out Into the Woods and the sweet sounding Wine Bar. Now, get ready for Dive Bar (above!), a rhodium plated setting with a tourmalated quartz semi-precious stone that is Game of Thrones tough-meets-Gwen Stefani rocker glam. And supermodel Coco Rocha is already a fan, sporting Dive Bar recently on Ringly’s Instagram (yeah, we have good eyes). So… we’re sold.

When we first sat down with Ringly’s CEO Christina Mercando to talk about the premiere line and to get our hands on those smart (in both brains and beauty) little tech-sessories, she explained how each style was named after an experience you could actually enjoy without looking at your phone the whole time. “Where’s Out to Brunch and Drinks With Friends?” I quipped (hilarious, I know). “HERE,” Christina said unearthing Wine Bar. But let’s face it, ladies and gents, wine isn’t what we’re sipping on Friday nights when we’re doing our best air guitar, headbanging our recently rainbow chalked locks in our vegan leather crop tops and distressed vintage jeans.

You’ll never believe how Ringly came up with the idea for Round 2 before Round 1 officially hit the streets — they actually listened to their early bird customers. On the first day of their pre-order, the glam wearable surpassed $60,000 in sales in just eight hours. Clearly, we weren’t the only ones dreaming of doing our favorite “Single Ladies” dance while rocking those connected rocks. Ringly won’t ship until late fall, but with a rush of customers and attention, the Ringly team was able to crowdsource ideas and get early feedback about wants, needs and “what’s nexts.”

“Other metals were a big request, and while 18k gold is timeless, we wanted to introduce something a little edgier as we inch toward the winter months,” Christina told us. Hate to admit it, but winter is coming… and this icy cool ring will keep you on the pulse of all that is happening. Heck, maybe by the time the first snow falls, you’ll already know because you set your weather app to buzz your Ringly when the temp is about to drop below brr. Just a thought ;)

In listening to early bird shoppers, the Ringly CEO also have a better sense of what we want to use our wearables for. “Social media, e-commerce and productivity were the most popular. Women want to be connected to their work, friends and fashion. Dating apps and Yo were some of my favorite suggestions!”

While it’s no vacation to wait weeks, months, even entire seasons until that crowdfunded campaign or pre-ordered gadget actually shows up at your doorstep, we’ll gladly be patient if our thoughts about our investment pay off in the meantime.

Ringly’s pre-order pricing (25% off!) ends on September 1, which is… ah! Monday, so make sure to hook yourself up before then.

What do you think of Ringly? Is it your favorite wearable around? What would you use it for? Share below!

Lisa Raphael
In her past professional lives, Lisa has served the masses as the Editorial Director at Brit + Co, Bieber Whisperer at J-14, Golden Girls Fan Club Prez at Lifetime and Talk Show Host Understudy to Katie Couric. Now, she's taking on the sports world at The Relish, teaching Hairography 101 in her spare time and will forever be trying to fill the hole Zayn Malik left in her heart.
Jewelry
Tech
Jewelry rings Wearable Tech
More From Tech