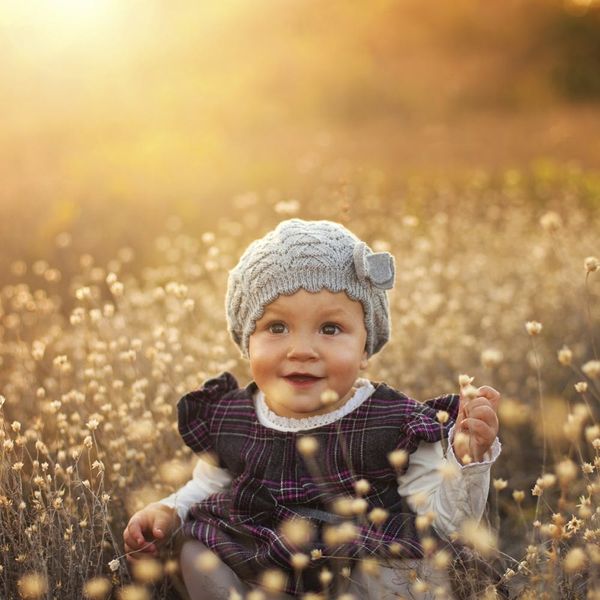 September signals a shift from the dog days of summer to cool autumn nights spent apple picking and coordinating school drop-offs. What many may not realize is that September is heavily associated with the color blue, given that the birthstone for September is the sapphire, and one of the three birth-month flowers is the forget-me-not. Parents of September babies have a palette of blue baby names to choose from, from the straightforward but bold Blue to less obvious choices like Livia.

1. Agatha: Agatha Christie is one of the most famous mystery writers of all time. Her name, which means “good woman,” has a distinctly Victorian feel, though the upbeat nickname Aggie has gained some traction in recent years. Agatha is a gentle name that may experience a revival, especially as Victorian names such as Matilda and Hattie continue to rise.

2. Azure: Azure is a literal “blue” name that is less adventurous than Blue or Bluebell, but still directly connected to the tranquil color. Azure is sure to appeal to modern parents who appreciate its lyrical beauty, and little girls especially are sure to enjoy its elegance and charm.

3. Dagny: I was thirteen when I decided to crack open the heaviest book in my parents’ library, which happened to be Ayn Rand’s controversial classic Atlas Shrugged. I was immediately fascinated by the book because it opened on my birthday, September 2. I was also enraptured by the female protagonist’s unusual name — Dagny, an interesting and unexpected choice.

4. Elsie: Lieutenant Elsie S. Ott was a courageous woman who served as a flight nurse during World War II and was the first female to be awarded the US Air Medal. Spunky and cute, Elsie can either serve as a nickname for the more popular Elsa or as a standalone name.

5. Livia: Another name associated with the color blue via its meaning, Livia is a lovely and ancient name of a completely different derivation than the more popular Olivia. In ancient times, it belonged to Livia Drusilla, wife of Emperor Augustus. Delicate and appealing, with the same Li-prefix as such popular appellations as Lily and Lila, Livia is fresh without being esoteric, and beautiful in its simplicity.

6. Jane: Jane Addams was a social reformer whose given name has gradually begun attracting attention again after a lengthy downswing. Jane is a euphonious name that combines elegance with ease of pronunciation and spelling. Even better, parents can tell their little Jane that she is named after this revolutionary women’s rights activist, who was born over 150 years ago on September 6. A Nameberry favorite, Jane stands at a solid but not too popular #355.

7. Aziz: Aziz is the upbeat, modern-feeling moniker given to the September-born Olympic athlete Aziz Zakari. Considering the rising popularity of names like Ava and Aviva, Aziz could be a viable name choice for parents looking to make their son’s name unique.

8. Indigo: Indigo is the second of the “blue” names that parents of September babies could consider. A flexible choice that would work for either a boy or girl, Indigo is an unusual and evocative choice, not to mention a lovely color.

9. Hugo: Hugo is a stately and literary name that younger generations may associate with the Harry Potter series or the movie Hugo. Hugo Montenegro was a composer who created a number of important film soundtracks; he was born the same day that Ayn Rand began writing Atlas Shrugged, on September 2.

10. Truman: Truman is a powerful name that will remind many of the Cold War-era President. Another famous individual with the first name Truman is Truman Capote, childhood friend of Harper Lee and author of the critically acclaimed In Cold Blood. Capote was born on the last day of September, making his moniker a fitting choice for a baby born during this month.

11. Walter: Walter is an old-fashioned name that has been attracting stylish parents for several years, with the nicknames Walt and Wally adding an air of playfulness. There are a number of famous men who have borne this classic name, including physician Walter Reed, who was born on September 13 and is credited with discovering the origin of yellow fever.

Do you have a favorite September baby name? Tweet us @BritandCo with your faves!