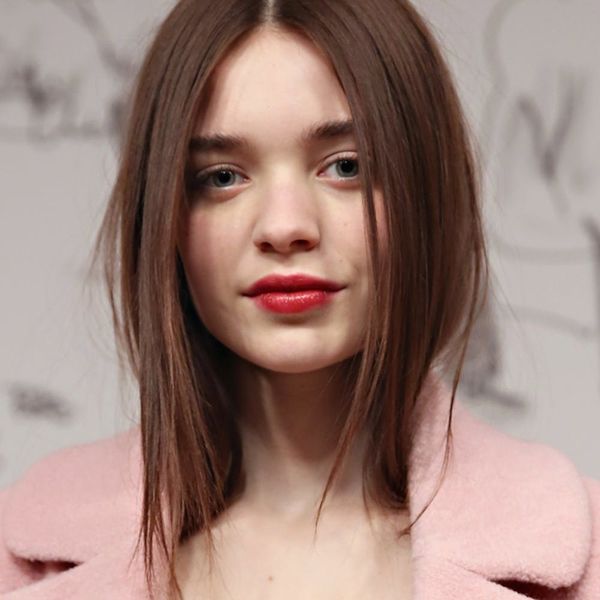 For all the ladies who’d rather snooze than flat-iron in the morning, who throw their coats on as they rush out the door and can’t seem to find a hair elastic anywhere: New York Fashion Week totally gets you. Sure, there are some pretty high-flying ‘dos on the runways, but there have also been a lot of #iwokeuplikethis looks. Tucked-in hair is the latest entrant into the “meh” lazy girl hair trend, showing up in shows like Coach, BCBGMAXAZRIA and J.Crew. Here are 10 easy, breezy ways to make tucked-in hair très chic this season.

1. Bright Sweaters: J.Crew combined cozy and colorful on the runway. The tucked-in hair on all the models really topped off the effortlessness. (Photo via Fernanda Calfat/Getty Images)

2. Chunky Turtlenecks: Turtlenecks are BACK, baby. Throw one over your head and don’t bother pulling your hair through — that way you’ll avoid tangles too. (Photo via Fernanda Calfat/Getty Images)

3. Prints and Patterns: If you’re a fan of mixing different prints, let them take center stage by donning this understated ‘do. (Photo via Frazer Harrison/Getty Images)

4. Scarves: Ever sneak a look at yourself in the mirror as you wrap your favorite scarf around your neck and think, “Whoa, I look cute”? You are so right. (Photo via Fernanda Calfat/Getty Images)

5. Wrap Coats: Just wrap, cinch and head out the door. It doesn’t get much simpler than that. (Photo via Jacopo Raule/Getty Images)

6. Sleeveless Dresses: The tucked-in hair look isn’t just for winter coats and scarves, as this model proves at the Edun show. (Photo via Slaven Vlasic/Getty Images)

7. Open Coats: Rarely is the windswept look very photogenic, but the effect becomes so much prettier with your ends tucked into your lapels. (Photo via Slaven Vlasic/Getty Images)

8. Sweater Dresses: Tucked-in hair paired with a stunning dress like this BCBGMAXAZRIA design would be a major head-turner on date night. (Photo via Frazer Harrison/Getty Images)

9. Pretty in Pink: A bright pink statement coat like this new Kate Spade design is the perfect frame for your flawless tresses. (Photo via Cindy Ord/Getty Images)

How do you like to tuck your hair in? Share your style savvy in the comments below!

Molly Griffin
Molly is a writer and editor from Boston who loves traveling, eating and occasionally being a little too candid. She lived in Dublin, Ireland for the last four years but recently moved to San Francisco to escape the rain. Now, she’s on the lookout for a good proper pub.
Hair Trends
Hair
Hair Trends New York Fashion Week
More From Hair