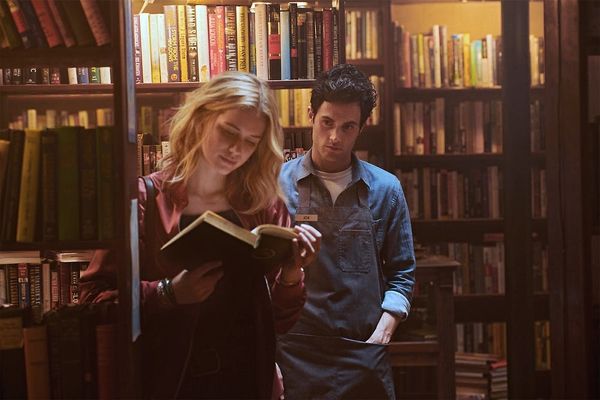 Penn Badgley’s role as Joe on the Lifetime/Netflix series You has captivated viewers, some of whom apparently find the character attractive, despite his — spoiler alert! — murderous tendencies and stalker-level obsessions with the women he dates. Badgley is fine with people liking his performance as an actor, but he’s very concerned with the idea that anyone might think You is a love story. (More spoilers ahead.)

In the show, which originally premiered on Lifetime before it hit Netflix in December, Badgley plays Joe Goldberg, a bookstore manager who becomes dangerously obsessed with a customer and writer named Guinevere Beck (Elizabeth Lail). Goldberg’s fixation becomes so severe that he ends up stalking Beck, as he calls her, and killing people who he thinks are getting in the way of their relationship.

The show has sparked a lot of buzz, especially since its debut on Netflix, and Badgley recently started responding to some of it on Twitter.

“Said this already but @PennBadgley is breaking my heart once again as Joe. What is it about him?” one person tweeted, prompting the actor to reply, “A: He is a murderer.”

The tweeter later clarified that they were referring to Badgley’s performance, not his character. “I see that — hope I didn’t accidentally drag you… but look what a response this is getting,” he replied. “People wanna talk about problematic/interesting dimensions of the show, which is a positive thing. Thanks for being a part of this process :)”

Another fan pointed out a connection between the actor’s Gossip Girl and You characters, tweeting, “The transition from Dan Humphrey — my crush — to Joe Goldberg — the guy I’m terrified of — is exceptional. How I actually believed @PennBadgley in both is scintillating.”

Badgley appreciated that analysis, noting thoughtfully, “That’s actually really interesting, thank you. Maybe part of the transition is actually you — all of us — growing up, or rather maturing in our perception of these toxic norms.”

He also sympathized with a viewer who said the number of people “romanticizing” Joe scared them, tweeting back, “Ditto. It will be all the motivation I need for season 2.”

Have you ever had a crush on a problematic character? Please share with us @BritandCo.