10 Places to Go When You Want to Break Things. Really. 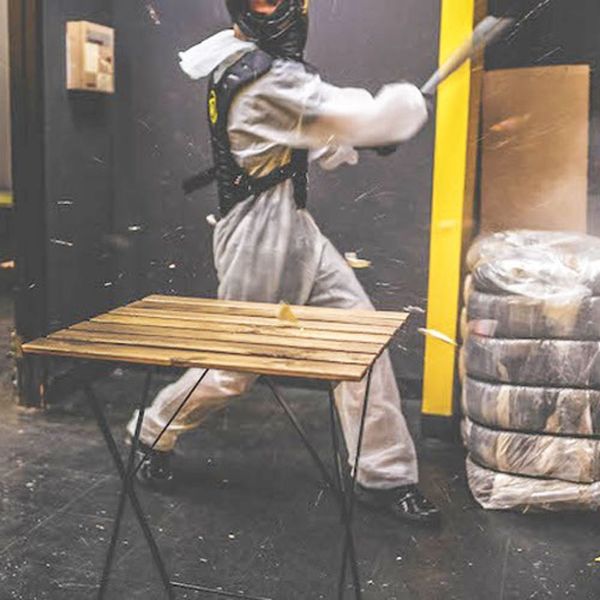 Everyone has times when they just can’t deal. Usually, these times occur in places where venting your anger in a satisfying way would make people question your sanity. Thankfully, there are some spots that actually encourage you to let go of your frustrations with some good ol’ healthy destruction. So the next time you feel like locking yourself away from polite society to scream obscenities into a pillow, visit these places to expel that inner rage.

1. The Rage Room, Toronto, Canada: Smashing your computer may get you fired, but the people at the Rage Room won’t judge you. For 30 minutes, they provide you with five items to smash, smashing weapons and protective gear. You can even bring your own things to break if you have an offending item that you wouldn’t mind pulverizing safely. (Photo via Battle Sports)

2. The Anger Room, Arlington, TX: Here’s a place that understands how “holding it in” can be more destructive than, well, destroying things. The Anger Room creates mock rooms you are free to wail on to your heart’s content. Included in the room are objects such as dummies, mannequins, TVs and tables in order to give you the true experience of going postal. This may even beat wine and bubble baths for after a long, hard day. (Photo via @angerroom)

3. The Paintball Park at Camp Pendleton, San Diego, CA: When your relationships feel like a war zone, let the battle happen on the field instead of at dinner. The Paintball Park at Camp Pendleton lets you play on an actual army base. Rally the troops and pretend you are the commander of your own battalion against your frenemies. Just remember to leave it on the field. (Photo via @thepbpark)

4. Gotham Girls Roller Derby Competition, New York, NY: Watching sporting events lets you vicariously live out friendly and not-so-friendly aggression. At the Gotham Girls all-female roller derby league, you can watch skaters go head to head around the rink trying to lap each other and clear a path by blocking the other team. They play at different locations around the city, so be sure to check out an event and cheer on these badass ladies. (Photo via @gothamgirlsnyc)

5. Dig This Las Vegas Heavy Equipment Playground, Las Vegas, NV: Ever been told not to drive angry? Since operating a large vehicle would be a bad idea when your brain is hitting a boiling point, it should go without saying that heavy machinery is out too. However, Dig This gives you a safe environment to drive bulldozers and operate cranes while destroying things on a large scale. Just make sure to take a deep breath before getting behind the wheel and enjoy the power of mechanically conquering your surroundings. (Photo via Dig This Vegas)

6. Funspot, Laconia, NH: Sometimes all you have to do is defeat a virtual enemy in order to feed your negative emotions. Funspot prides itself on being the largest arcade in the world. You can play anything from classic video games to mini-golf. If you’re really feeling the need to hit something, a game of whac-a-mole may be all you need. If you end up scaring any children, just tell them this is between you and the moles. (Photo via Valerie Hinojosa/Flickr)

7. Glass Beach, Fort Bragg, CA: Marvel in the beauty that destruction can create as you walk along this sea glass-encrusted beach. The waves have eroded these pieces of glass to create a treasure from what was once trash. Hear the clinking of these small broken objects beneath your shoes and thank the ocean for doing the dirty work for you. (Photo via Kashif Pathan/Flickr)

8. Rock and Roll Hall of Fame, Cleveland, OH: You may not be able to smash a guitar, but you can tap into your inner punk rockstar at the Rock and Roll Hall of Fame. This museum is dedicated to the history of rock legends such as AC/DC, Black Sabbath and the Ramones. Close your eyes and imagine it’s you letting out those high notes and tearing up hotel rooms. (Photo via @rockhall)

9. Voodoo Authentica, New Orleans, LA: Not that we are encouraging revenge, but poking a voodoo doll may be a good way to get out anger toward a person without actually hurting them. This practitioner-run store sells a variety of voodoo-related items such as dolls, books and candles for those times when setting a spell will make you feel better — whether it works or not. (Photo via wendEwho! Thompson/Flickr)

10. The Smash Shack, Jacksonville, NC: The Smash Shack allows you to write and draw on plates before smashing them. Mentally smash your worries by labeling a plate with them and going to town. You’ll wonder why your therapist won’t let you do this around her office. (Photo via The Smash Shack NC)

Do you have a place where you can let it all go? Tell us about it in the comments!

Marguerite Spellman
Marguerite is a comedy, creativity, and health writer. When not running around performing and writing sketch comedy in New York City, she writes about her experience running around as a yoga teacher in the city in her blog The New York City Yogi. Check out both of these pursuits at www.meggie-spellman.com.
Health
More From Health