Sipping This Will Save You from Getting Flushed While Drinking 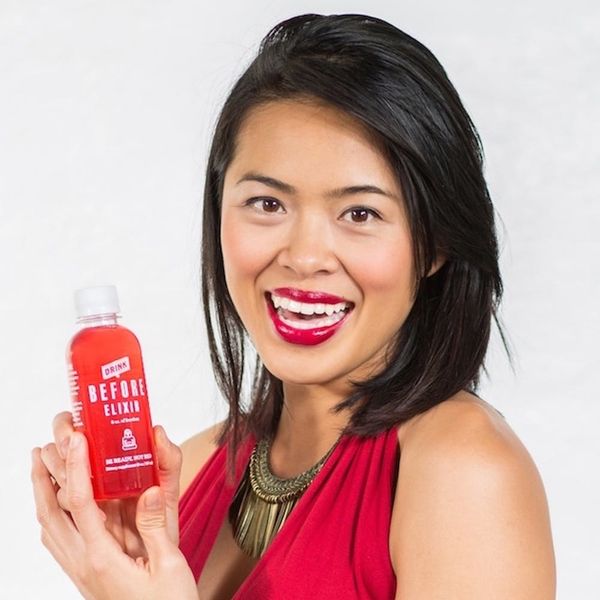 If you suffer from Alcohol Flush Reaction, you know that drinking with your friends can be embarrassing for a whole *other* reason. Getting an insta-headache or blushing uncontrollably makes your Happy Hour less than happy. If you have no idea what we’re talking about, then you’re not part of the 70% of Asians and 15% of non-Asians who experience nausea and turn red in the face when they drink alcohol. But for those of us who are all too familiar with the effects, put aside the mocktails and get out the Jello shots, because Before Elixir just entered the scene.

A self-proclaimed health nut, Jen Du developed Before Elixir when she was in business school, after giving up alcohol altogether. She knew that many people popped antacids while drinking to prevent flushing, but she didn’t like the idea of taking a medicine for something other than its intended use. She developed a combination of vitamins, amino acids and plant extracts to help slow down the metabolism of alcohol, preventing the horrible side effects of Alcohol Flush Reaction.

When consumed 30 to 60 minutes before a party and mixed with every third drink for you late-nighters, Before Elixir reduces flushing by over 60% in about 90% of people. After extensive testing and tasting parties in Austin and San Francisco, the Before Elixir team has launched an Indiegogo campaign to get their product into bars and stores around the country. Want to test out the product for yourself? A $20 pledge gets you two bottles, which is enough for six drinks. Check out their YouTube video to see a time lapse of Before Elixir’s effectiveness.

Would you try Before Elixir before your next party? Let us know in the comments!

Amanda DiGiondomenico
Amanda is a freelance writer and graphic designer who blogs about living a stylishly nerdy life at The Spendicate. A lifelong resident of Baltimore, MD, Amanda is an art school dropout, who managed to earn a masters degree in nonfiction writing. On the weekends, she's an expert guacamole maker, a novice jogger and an intermediate yogini.
indiegogo
Recipes
indiegogo
The Conversation