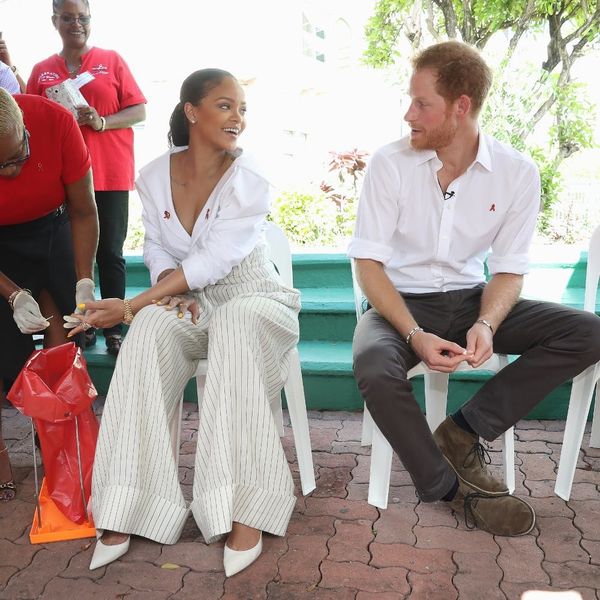 Back in July, when we saw Prince Harry’s first ever live video, it just made us love him more. That’s because the young royal was taking an HIV test in order to help stop the stigma around getting yourself checked out. Now in Barbados with the best tour guide the island could offer, Rihanna, Prince Harry underwent yet another test — and this time RiRi was right there with him.

Sitting side by side on #WorldAIDSDay with the sun shining behind them and cameras rolling, the Prince of England and Queen of Pop Hip-Hop chatted and smiled while taking the simple yet oh-so-important test.

The prince and the popstar @rihanna , in Barbados, talking about HIV testing. #WorldAIDSDay pic.twitter.com/X4kkdZLNYJ

While getting the word out about both clinic testing and at-home testing, the two also spoke to the press to reiterate their message. “I was so excited to find out that it was so easy, and the results come back that quickly,” said Rihanna, adding, “You can find out literally on the spot, your status, and it’s very discreet.”

Harry addressed the reason he’s taking tests so publicly, saying, “The younger generation coming through want to talk about it, but there’s still that stigma. If us getting tested normalizes it and makes a difference, even a small difference, then job well done.” We totally agree.

And, seriously, just when we thought we couldn’t adore these two more, BAM! They go and do something awesome like this.

What do you think about Prince Harry and Rihanna taking HIV tests together? Tweet us @BritandCo!

Desiree O
Desirée O is a ‘Professional Bohemian’ who loves anything and everything related to the arts, entertainment, and pop culture. She ADORES being a ‘Newsy’ for Brit + Co, covering all of the latest tidbits of awesomeness that you want to read about. When she’s not writing, she’s either making messy art, going on long adventurous walks with her camera, or poking around over at bohemianizm (http://www.bohemianizm.com/). You can find out about Desirée O and her work at http://DesireeO.com/ or follow her on Twitter @DesireeO.
Royal Family
Health
Royal Family
More From Health