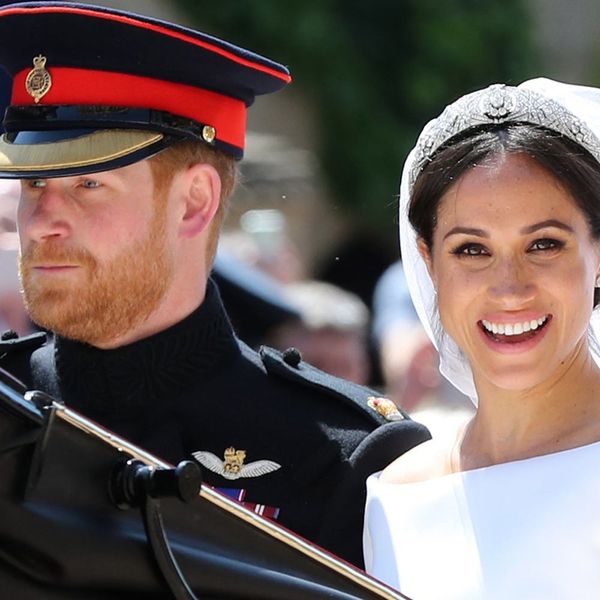 It’s been quite the exciting day for the royal family! After all the celeb-filled pomp and circumstance of Prince Harry and Meghan Markle (AKA the Duke and Duchess of Sussex)’s wedding, the couple took to the streets of Windsor for a horse-drawn carriage procession as husband and wife to share their celebration with the public.

Fans waited outside as the royal pair exited through a floral trellis and shared their first kiss under a rose-filled archway before climbing into their Ascot Landau carriage to the tune of Etta James’ “Amen/This Little Light of Mine.”

For nearly 30 minutes, the newlyweds waved to the estimated 150,000 royal enthusiasts gathered to see them partake in an age-old tradition as they were pulled through the city by four Windsor Grey horses, including a father and son team called Storm and Tyrone.

The chariot was one of several owned by the royal family, with the open-top designed for just such an occasion. The carriages are also used for coronations and other official state visits: As you may recall, Prince William and Duchess Kate also enjoyed a procession through London for their 2011 nuptials, albeit in the Imperial Ascot Landau (a much larger, grander version of the one the royal couple rode in today).

Once the pair’s two-mile tour of the town was complete, they returned to Windsor Castle to prepare for their wedding reception and party.

What did you think of Harry and Meghan’s wedding? Let us know @BritandCo!

Kat Armstrong
Kat has been a writer, social media maven and mom for longer than she's willing to admit. She's also spent time in front of and behind the camera, interviewing celebs, politicians and acting as a producer for fashion and artistic photography shoots. When she isn't writing for various orgs and publications, she's hanging with her kids, husband and French Bulldog, Peter, in Toronto, Canada.
Celebrities
Celebrity News
Celebrities Royal Family Royal Wedding Weddings
More From Celebrity News