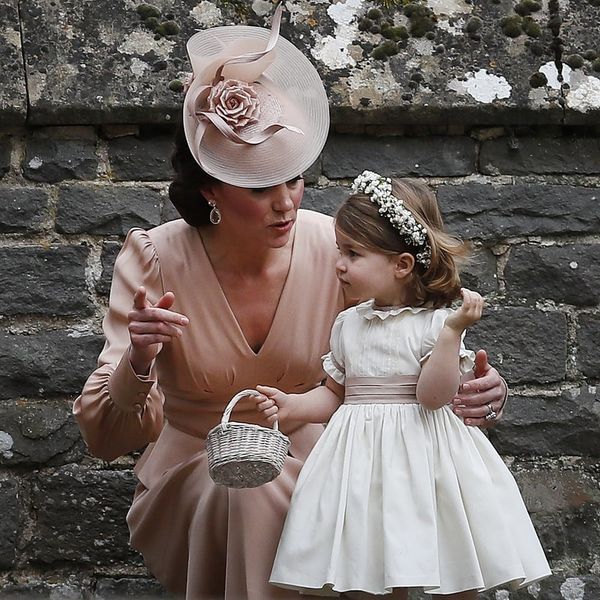 We’ve been counting down to today for MONTHS to get a glimpse at the royal family in all their wedding best, and now, it’s finally happened — Pippa Middleton has tied the knot with her beau, hedge fund manager James Matthews, in a breathtaking ceremony that included a knockout wedding dress, guest outfit changes, and countless fashionable moments from the royal wedding party.

While Kate Middleton (who, surprisingly, was not her sister’s maid of honor) stunned in a blush Alexander McQueen creation, it was her mini-me, Princess Charlotte, that was cutest of all in a picture-perfect pint-sized custom bridesmaid outfit from Pepa & Co, a “boutique designer clothing company for children, specializing in Spanish clothing.”

Her tiny white dress with puff sleeves was buttoned at the back and complemented by a huge blush bow (all the better to match mum) tied in the back. Her accessory game was equally on point, as she showed off tiny blush Mary Janes and an ultra fashionable flower crown while holding a flower heart. Not surprisingly, she instantly set Twitter ablaze with her cuteness.

Princess Charlotte is the cutest 👑💗✨ pic.twitter.com/uekNypOgrf

Princess Charlotte wears a flower crown better than anyone at Coachella ever could. #PippasWedding pic.twitter.com/P1a9mpIfLM

Charlotte wasn’t the only one making us swoon, however: Older brother Prince George and his fellow page boys also showed off unique creations from Pepa & Co that were beyond adorbs.

The three-year-old looked like the spitting image of his dad as he donned a white long-sleeved shirt with a rounded collar and buttons that matched his silk trousers. Finishing off his regal look were white tights and shoes.

The grumpy bridesmaid from the Royal Wedding has nothing on these two: So. Darn. Cute!

Who had your fave style moment at Pippa’s wedding? Tweet us @BritandCo.