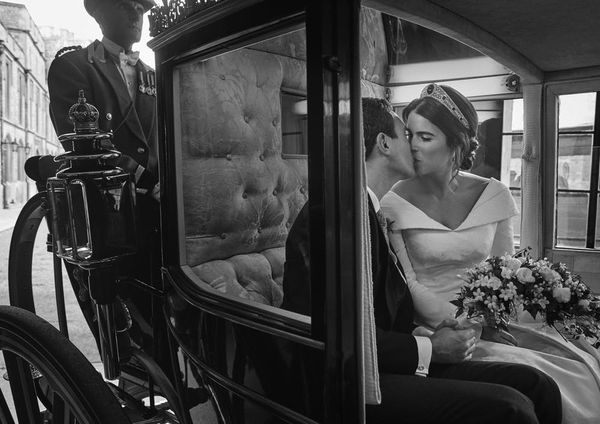 Can’t get enough of Princess Eugenie and Jack Brooksbank’s wedding photos? Neither can we. Fortunately for us, the royal family released the newlyweds’ official portraits on Saturday, October 13, and they’re positively gorgeous.

The couple chose fashion photographer Alex Bramall to take the pictures at their wedding, which took place at St. George’s Chapel at Windsor Castle on Friday, October 12. Bramall’s work has appeared in Vogue, Vanity Fair, Harper’s Bazaar, and Porter, among other publications.

“It is an honor and a privilege to be invited to photograph Princess Eugenie and Jack on this most special of days,” Bramall said in a statement. “I look forward with great excitement to capturing this significant occasion and wish them both a happy future together.”

Of the portraits released Saturday, one features Princess Eugenie and her groom with their wedding party, which included Prince George and Princess Charlotte, as well as Savannah Phillips, Isla Phillips, Mia Tindall, Maud Windsor, Theodora Williams, and Louis de Givenchy.

A second features the couple with their wedding party and members of their families: the bride’s father, Prince Andrew; her mother, Sarah, Duchess of York; her sister, Princess Beatrice; her grandmother Queen Elizabeth II; her grandfather Prince Philip; Brooksbank’s parents, Nicola and George; and his brother, Thomas.

Another, less formal portrait — this one in black and white — shows the happy bride and groom sharing a sweet kiss in the Scottish State Coach during their carriage procession through Windsor, England, following the ceremony. The procession was followed by an afternoon reception hosted by the queen, and then an evening after-party where their loved ones (including some celebrity guests!) enjoyed a surprise performance by Robbie Williams.

What do you think of Princess Eugenie’s official wedding portraits? Tell us @BritandCo!