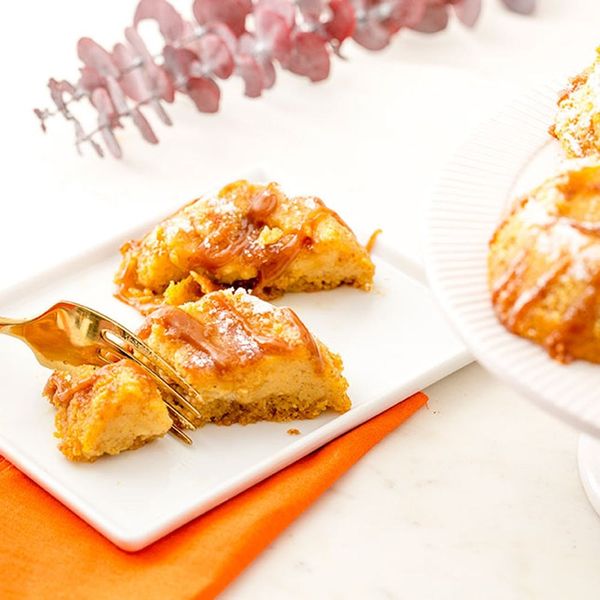 It’s been a couple weeks since we found out about magic cake, and it’s safe to say that it is still a hot topic of conversation. A cake with a sponge layer, a custard layer and a fudgy layer — yes, please! We had to try it out for ourselves, and B+C readers — we are happy to introduce you to this magical dessert for all your future holiday parties. Your guests will love this the pumpkin magic cake topped with a caramel sauce and sprinkled with our favorite kind of snow — powdered sugar :)

1. Separate all four eggs — add the egg whites to a mixer and place egg yolks in a bowl to use later. Mix the egg whites until they form stiff peaks.

2. Beat the egg yolks with the sugar until combined. Then add butter, vanilla extract, cinnamon and pumpkin, beating for another minute. Add the flour and mix it in until fully incorporated.

3. Slowly start adding the milk and beat until everything is well mixed together.

4. Add the egg whites, a third at a time, and gently fold them in using a spatula. Repeat until all egg whites are folded in.

5. Pour batter into a greased baking dish and bake at 325 degrees for 60 minutes, or until the top is lightly golden.

6. Sprinkle some powdered sugar and caramel sauce on top after the cake has cooled.

Is it just me or does everyone feel satisfaction when separating eggs? Place the four egg whites in the bowl of the mixer and then set the four egg yolks aside to use later.

Set your mixer on medium speed and whip until the egg whites form stiff peaks.

Set the egg whites aside and mix together the sugar and egg yolks.

Next add in the pumpkin, vanilla, cinnamon and butter. Note: Make sure your butter is melted! I added it in at room temperature, which might have been the reason I didn’t get such clean layers.

Once the wet ingredients are mixed, add in the flour and then slowly add in the milk.

Pour into a greased pan and bake at 325 degrees.

Wait for the cakes to cool before removing from the pan.

Add some powdered sugar to your sifter and sprinkle that snowy goodness on top of your petite cakes.

Finish it off with a caramel glaze. Don’t have caramel on hand? Me neither — I followed this recipe.

Our magic cake definitely had the sponge and custard layer, but the fudge layer was a bit iffy. Like I said, this could have been because I forgot to melt the butter — whoops!

Show us your favorite holiday recipes by tagging us on Instagram + using the hashtag #iamcreative!