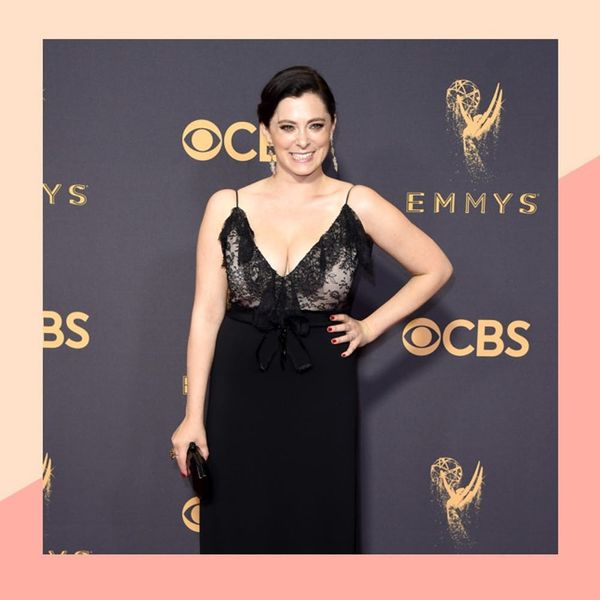 There’s no doubt that she stunned in a black Gucci gown on the Emmys 2017 red carpet, but Rachel Bloom just dropped the biggest red carpet truth bomb of all time: She bought the dress herself.

The Crazy Ex-Girlfriend creator admitted that she purchased her dramatic black Gucci gown with lace embroidery and spaghetti straps herself, telling E!‘s Giuliana Rancic that she paid full price. #shesworthit

Bloom was thrilled to be rocking a design by the iconic fashion brand, but she was quick to reveal that she was not given the dress for free as many might assume. “I bought this dress because Gucci’s not lending me a dress,” she quipped. (Photo via John Shearer/WireImage)

“I bought this dress because I love it, and I can resell it. Here’s the thing: I’m now at the place where I can afford it… I’ve said before in interviews that sometimes it’s hard for places to lend me dresses because I’m not a size zero but also, I can afford it, so it’s okay. Why not?” (Photo via Steve Granitz/WireImage)

She also joked that she plans on reselling it on The Real Real, an online luxury consignment boutique that the actress is an enthusiastic fan of.

Stars: They’re just like us. They buy their own dresses and sell ’em for a few bucks back. We love that Bloom always keeps it, well, real real.

What do you think of Rachel Bloom’s Gucci gown? Let us know @BritandCo!

Arielle Tschinkel
Arielle Tschinkel is a pop culture junkie who went to NYU because the Olsen twins went to NYU (really). She is a freelance writer whose work has also been featured on HelloGiggles, Refinery29, SheKnows, Bustle, Hollywood.com, and many others; and she's living her dream one Britney Spears GIF at a time. Follow her on Twitter @mrstschinkel or visit her website at arielletschinkel.com.
Celebrity Style
Red Carpet
Celebrity Style Emmys Red Carpet
More From Red Carpet