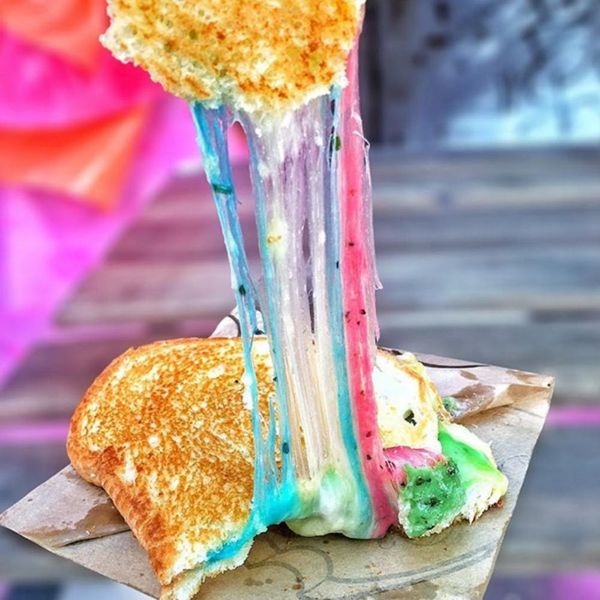 Rainbow-colored food, like rainbow bagels and rainbow donuts and yummy rainbow cakes, has charmed both the visual tastes as well as the taste buds of Instagramming foodies all over the world. Now, taking the trend beyond desserts, one of your favorite lunch orders has just been given the rainbow connection. We’re talking about rainbow grilled cheese.

Not exactly your normal midday meal, this colorful sandwich includes “lavender (blue), basil (green), tomato (red) and the yellow one is actually the combination of 4 kinds of cheese (mozzarella, cheddar, emmental and gruyere),” according to blogger hkfoodiexblogger.

Hkfoodiexblogger gave a mini review of the sandwich, which is currently being served in Hong Kong’s KALA toast, saying, “The toast was crispy but I reckon both the flavour of the lavender and tomato were subtle. The basil flavour was the most outstanding one comparatively but the cheese flavour still was not as storing as my expectation. It was also a bit oily in general. I would say the quality was rather average but we all cannot deny that it is photogenic. 😜” Photogenic, indeed! This is the kind of food Instagram was made for!

Would you be willing to try a rainbow grilled cheese, or is it just too pretty to eat? Tweet us @britandco!