Rihanna Sent Everyone to Detention for Her Fenty x Puma Show 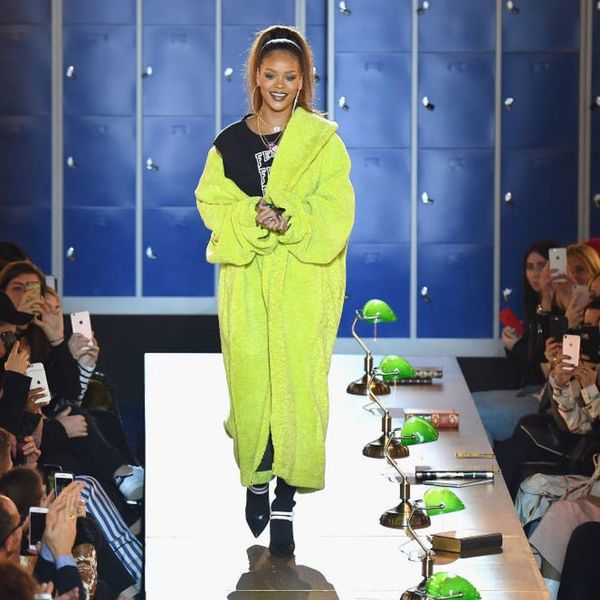 Leave it to Rihanna to take over a super old French library and fill it with fashionable misfits during Paris Fashion Week. For her Fall 2017 Fenty x Puma collection, she invited attendees with a detention slip and had them sit at long reading tables-slash-runways complete with green library lamps, mimicking a scene from the Breakfast Club.

#FENTYXPUMA University class of 2017. School's out.

Rihanna took the stage to give her bow wearing a bright yellow coat, a Fenty x Puma black t-shirt, and boxing-inspired heels while celebs including Cara Delevingne, Salma Hayek, and a couple of Jonas Bros. cheered in the crowd.

“There are a lot of simple things and a lot of complicated, more exaggerated pieces that combine really well together,” she said in a behind-the-scenes clip she shared on Instagram. “I’ve never been in love with a collection more than this one.”

The show was met with tons of virtual applause on Twitter, natch.

@rihanna take it. Everything I got. My soul too. #FENTYxPUMA pic.twitter.com/faJQTfEayY

It’s time to report to detention.

Who else is obsessed with this concept? Tweet us @BritandCo!

Channing Hargrove
Channing Hargrove is a freelance fashion editor and writer in New York City. When she isn’t writing about clothing (or shopping, for research, of course), Channing is writing about life in a tiny studio apartment in a big city — and what she’s wearing — on her blog, Channing in the City.
Athleisure
Style News
Athleisure Designer Fashion Week
More From Style News