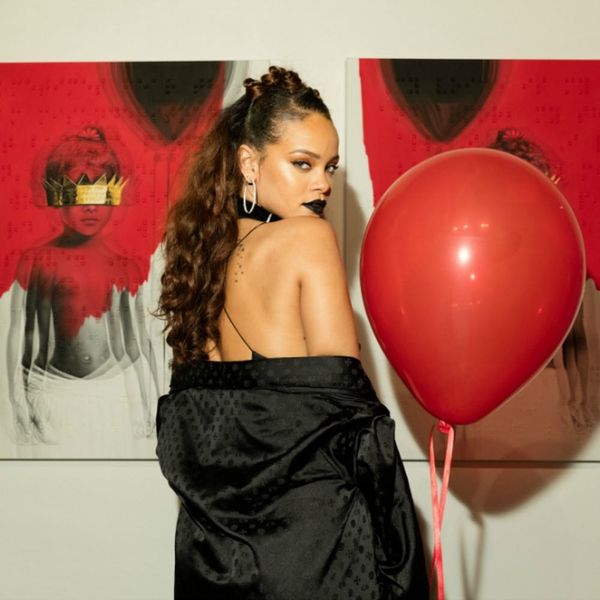 Rihanna debuted Anti last night! We’ve only been waiting for this for about four years — or since 2012’s Unapologetic. Rihanna has dropped a number of singles in recent months, always hinting that the new album was eminent. The drop was preceded by a frenzy on Twitter yesterday, after Rihanna released the single Work, featuring Drake.

If you are like me and dying to hear this latest, her eighth album, we may have to chill our heels. It is available for streaming and downloads this week exclusively on new music platform Tidal — Rihanna and Jay Z are both backers. You will have to subscribe to the site to hear the album full-length but non-subscribers can listen to 30-second previews for free. And a spatter of codes is being put out randomly by Rihanna and Sony, offering free downloads, if you are lucky enough to nab one.

Back in mid-December, singer/songwriter Sia Furler, who wrote Diamonds for Unapologetic, told BBC Radio that she’d met with Rihanna and hoped some of her songs would be picked up for Anti. Diamonds, which was a feature song on the soundtrack for the moving French film Girlhood, had an emotional depth that’s absent in the single Work. With it’s droning chorus, Work sounds a bit tired and is certainly no dance tune, though perhaps that underscores the point of the song. Anyway, I’m eager to hear the rest of the songs — hoping to find a Sia tune among them. Many critics felt Sia’s Cheap Thrills or Chandelier would have been perfect for Rihanna and were missed opportunities. Let’s see if she picked up another Sia jewel here. (Runs off to try Anti code.)

Did you get to hear Anti yet? Tweet us at @BritandCo!

Sally Jones
Sally Jones is a writer and editor living in New York City. She has worked at many websites including iVillage, Ladies Home Journal, More, Parenting, Cosmopolitan, The Knot and YourTango, in jobs ranging from editor to COO. Renovation and interior design are her unhealthy obsessions hobbies. She has renovated every home she's lived in, including the rentals, and like... whoa, who does that? You can catch her at her blog Renov8or.
Music
Pop Culture
Music
More From Pop Culture