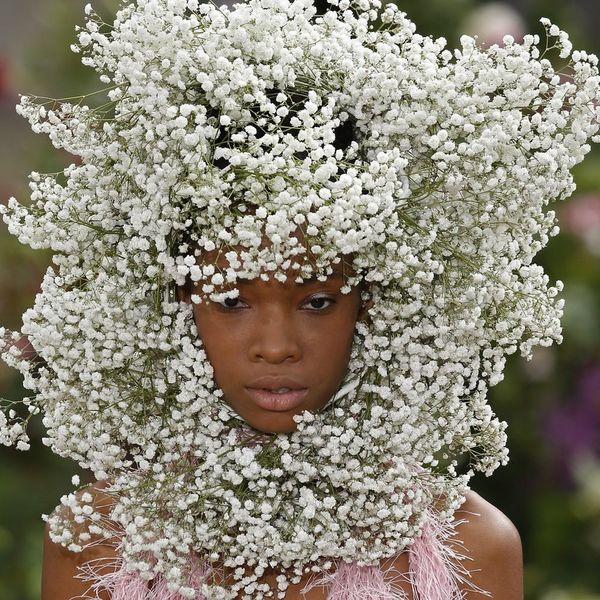 Paris is kicking fashion week off with a bang! While Christian Dior held a special exhibit to honor its 70th anniversary, its Rodarte’s spring 2018 show that people can’t stop buzzing about, after the design duo of Laura and Kate Mulleavy sent models down the runway in some insanely pretty — and slightly bizarre — headwear.

Gilbert and her team shaped the delicate flowers into dramatic wreaths, barrettes, and ribbons, some spanning down the length of the hair, with others in a more conventional shape. Other pieces were made to act as accessories, adorning arms, wrists, necks, and the like. “We wanted to do something magical,” Gilbert confessed to Vogue. Uh, mission most definitely accomplished!

The pièce de résistance, however, came in the form of the floral… head wrap!? that surrounded one model’s entire face.

Gilbert explained her unique creations, saying, “People say romantic is boring… but every girl in the world wants to look like this. We need romance now more than ever.”

Rodarte’s flower crowns: yay or nay? Tell us over @BritandCo.

Nicole Briese
Nicole is the weekend editor for Brit + Co who loves bringing you all the latest buzz. When she's not busy typing away into the wee hours, you can usually find her canoodling with her fur babies, rooting around in a bookstore, or rocking out at a concert of some sort (Guns N' Roses forever!). Check out all her latest musings and past work at nicolebjean.com.
2017 Style Trends
Style News
2017 Style Trends Fashion Week Flowers
More From Style News