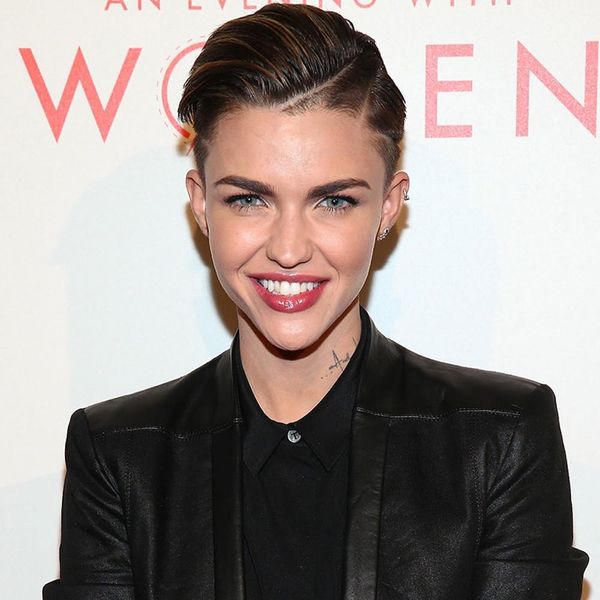 While watching the newest season of Orange Is the New Black, we were obviously wrapped up in all the drama and super entertained by Taystee’s hilarious one-liners. But the Litchfield inmate who caught everyone’s eye was newcomer Stella Carlin (or Ruby Rose IRL). The Australian actress, TV presenter and DJ instantly became our new beauty muse. From her unique tattoos to her perfectly androgynous style, the girl can do no wrong. But TBH what we’ve really been eyeing is Ruby’s crazy cool pixie cut.

Shaved on the sides with a long, dramatically parted top, Ruby’s hair is the stuff of short-haired girls’ dreams. We’ve seen our fair share of lob haircuts as of late, but if Ruby has inspired you to go even shorter (but not too short) here are seven other long pixie cuts to inspire a dramatic summer chop.

1. Kate Mara: With long bangs and shorter layers throughout, Kate Mara’s recent chop is actually super similar to Lily Collins’ cut. While Collins showed us just how sleek the cut can look when styled straight, Mara is making a real case for rocking the look with a bit of bedhead. (Photo via Michael Buckner/Getty)

2. Scarlett Johansson: Scarlett’s style is super long on top with some added edge thrown in with shaved sides. If you’re worried that a pixie is a one-style-only kind of cut, check out the five dramatically different ways the actress has worn the hairstyle here. (Photo via Mark Davis/Getty)

3. Michelle Williams: If you’re someone who really only gets her hair cut a couple times a year, here’s a style that’s super low maintenance and will grow out into a chic angled bob. (Photo via Craig Barritt/Getty)

4. Shailene Woodley: If you’re ready to amp up the drama, copy Shailene’s style that’s super long on top, with layers gradually getting shorter toward the bottom. (Photos via Jason Merritt/Getty)

6. Jennifer Hudson: Go for something a bit edgier and copy this ultra-blunt style Jennifer Hudson recently sported at the iHeartRadio Music Awards. The heavy bangs are slightly bowl cut-ish, but we’re into it. (Photo via Jason Merritt/Getty)

Do you have a long pixie you’re loving? Share a snap with us in the comments below.