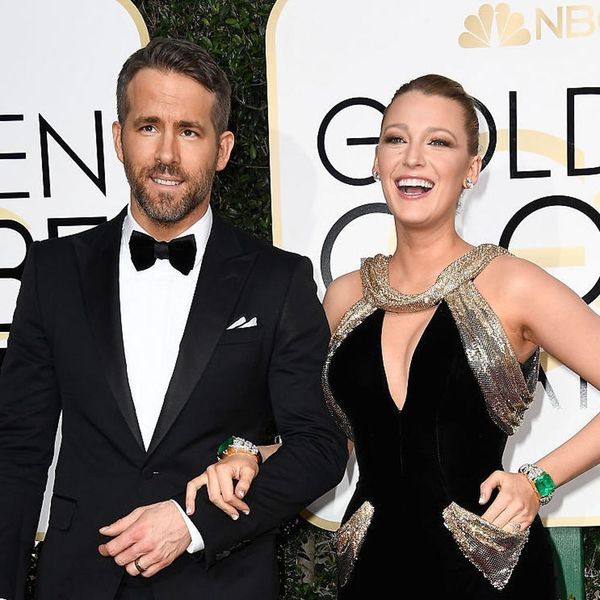 Not only is Ryan Reynolds a Hollywood hunk and part of one of the cutest celebs couples around, but he’s also well-known for his hilarious dad jokes and, er, questionable parenting advice (if you haven’t read what he feels you REALLY need to know in the delivery room, you probably should). He may seem super saucy on social media, but it turns out that he sometimes checks in with his wife, Blake Lively, before hitting “send.”

Revealing that most of his silly messages are sent on the fly — kind of literally, with the star saying that the majority of his tweets are “done on, like, an airplane, flying somewhere” — the 40-year-old father of two told Entertainment Tonight, “Some of the ones about our daughter or parenting ones or [with] advice no one should take, I run past [Lively], in case she objects.”

No matter which kids book I read to my screaming baby on an airplane, the moral of the story is always something about a vasectomy.

While we’re sure Lively appreciates Reynolds’ sense of humor more than anyone, it’s nice that he checks in with his partner in case he crosses a line while kidding around with his 6.5+ million Twitter followers.

Damn it's hard letting your infant daughter go somewhere alone for the first time. I was a total mess dropping her off at Burning Man.

We hope this doesn’t mean he’ll restrain himself too much, though, because his views on parenting are pure gold.

On our 6am walk, my daughter asked where the moon goes each morning. I let her know it's in heaven, visiting daddy's freedom.

As Reynolds currently makes the press rounds for his action comedy, The Hitman’s Bodyguard, and Lively preps for her own upcoming projects (including playing the lead in a new film from the author of Big Little Lies, as well as an apparent action film), the Deadpool star was asked if he’d be using his experience to help his wife train. His reply was worthy of a tweet: “Why would I need to help my wife with training or fighting tips? My wife can train and kick ass all on her lonesome. She don’t need me for any of that.”

Lively may not need Reynolds to amp up her action skills, but he apparently needs her to tone down his humor, so it’s probably a good thing that these two have each other.

What do you think of Ryan Reynolds’ dad jokes? Let us know @BritandCo!

Desiree O
Desirée O is a ‘Professional Bohemian’ who loves anything and everything related to the arts, entertainment, and pop culture. She ADORES being a ‘Newsy’ for Brit + Co, covering all of the latest tidbits of awesomeness that you want to read about. When she’s not writing, she’s either making messy art, going on long adventurous walks with her camera, or poking around over at bohemianizm (http://www.bohemianizm.com/). You can find out about Desirée O and her work at http://DesireeO.com/ or follow her on Twitter @DesireeO.
Blake Lively
Celebrity News
Blake Lively twitter
More From Celebrity News