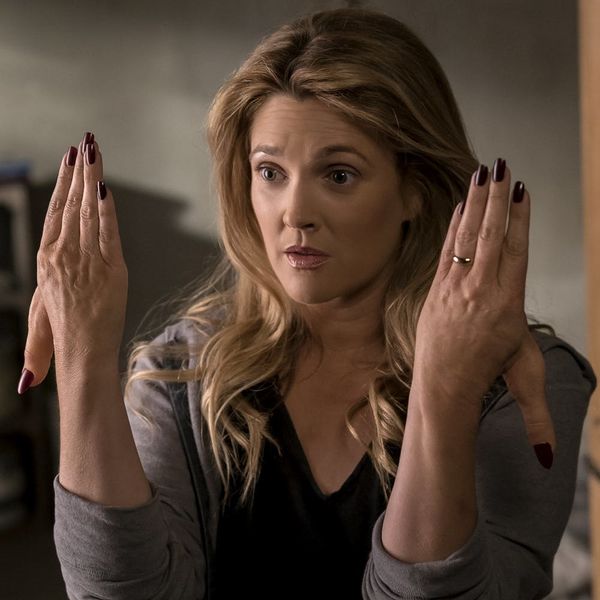 The first season of Santa Clarita Diet made us realize just how funny (and strangely relatable) the undead can be. And it looks like that will continue in season two. Netflix just dropped a brand-new trailer for the series, which sees Drew Barrymore’s character attempting to have it all. In her case, that means balancing her regular routine while coping with her new-ish zombie lifestyle — and possibly saving the world?!

“Someday, if you have kids, and you get a virus and start killing people, you’ll appreciate how well your mother and I are doing,” Joel Hammond (Timothy Olyphant) tells his daughter Abby (Liv Hewson) while the family digs graves, constructs a (too trendy?) kill room, and deals with a talking head in a basement cabinet.

All the while, Sheila (Barrymore) is trying to manage her, er, cravings as she attempts to figure out how she was first infected with the zombie virus so she can prevent it from spreading.

But saving the world from her undead fate won’t be easy with fingers flying off, a new police officer around, and more zombies possibly roaming the streets. And that’s on top of the fact that the Hammonds “have a lot of balls in the air” as they try to keep up appearances. That means staying on top of work (which includes tackling a new housing development!), socializing with neighbors, and pretending to be a perfectly average family that doesn’t include a mom with a gigantic (flesh-eating) secret.

Yet, even with all of this chaos going on around them, the Hammond family sticks together. As Joel says, “I love you and we have each other. Everything else we can figure out.” Of course, that’s right before he walks into their kitchen, which is covered in blood.

Are you excited for season two of Santa Clarita Diet? Let us know @BritandCo!