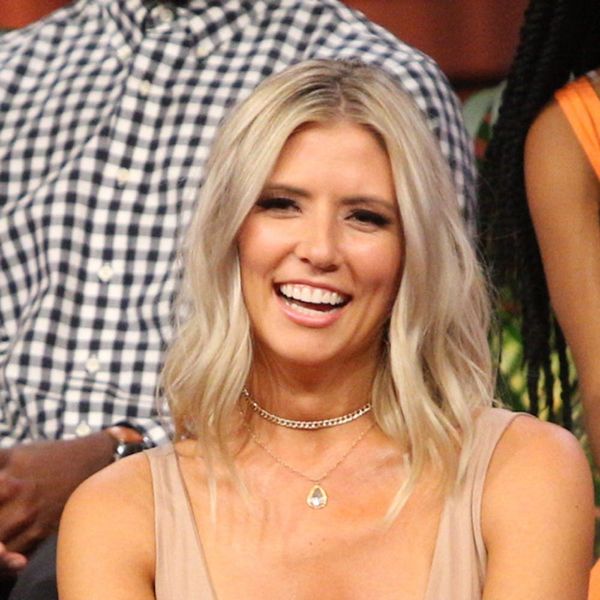 Sarah Hyland and Wells Adams had both Modern Family and Bachelor Nation fans agog when the two popped up in coordinated Stranger Things Halloween costumes, sparking MAJOR dating buzz. Though neither party has confirmed a relationship, they may not have to, as Bachelor in Paradise alum Danielle Maltby (who also happened to spark romance rumors with Adams herself not so long ago!) may have just done it for them.

It all began when both Hyland, 26, and Adams, 33, took to social media to give us a glimpse at their possible new love with super sweet pics of themselves with one another.

The RL Haley Dunphy first shared a photo of herself with her potential beau in a seemingly silly mood, leaning into him and sticking her tongue out. She added the rather telling caption, “He puts up with me 😝❤️”

The radio personality shared his own image just few hours later, and if tongues were wagging before, they were practically on the floor with the shot of the reality alum’s arm around the lovely lady’s shoulders, gazing adoringly into her eyes with a blissful smile on his face.

While both were perfectly sweet photos, some fans attempted to stir up drama, tagging Maltby on Hyland’s pic and insinutating that she might be upset. Adams’ former co-star quickly shut it down, however, letting fans know that their theories couldn’t be further from the truth and potentially outing the couple in the process.

“Are you kidding me?” she responded to the fan. “I ship this couple SO hard! I’ve never seen Wells so giddy and happy! Try spreading some love instead of knocking down one of the cutest and most genuine coupling I’ve seen in a long time.”

Whoa! Not only is it totally awesome to see that these two really are friends IRL, but it also sounds like confirmation from someone in the know.

Adams happened to like that comment, as well as one his new lady love left for Maltby saying, “[Y]ou’re the cutest 😘”

We, for one, wholeheartedly agree.

Are you shipping Sarah Hyland and Wells Adams or are you not into them as a couple? Let us know @BritandCo!

Desiree O
Desirée O is a ‘Professional Bohemian’ who loves anything and everything related to the arts, entertainment, and pop culture. She ADORES being a ‘Newsy’ for Brit + Co, covering all of the latest tidbits of awesomeness that you want to read about. When she’s not writing, she’s either making messy art, going on long adventurous walks with her camera, or poking around over at bohemianizm (http://www.bohemianizm.com/). You can find out about Desirée O and her work at http://DesireeO.com/ or follow her on Twitter @DesireeO.
Celebrities
Celebrity News
Celebrities Celebrity Couples Friends love the bachelor