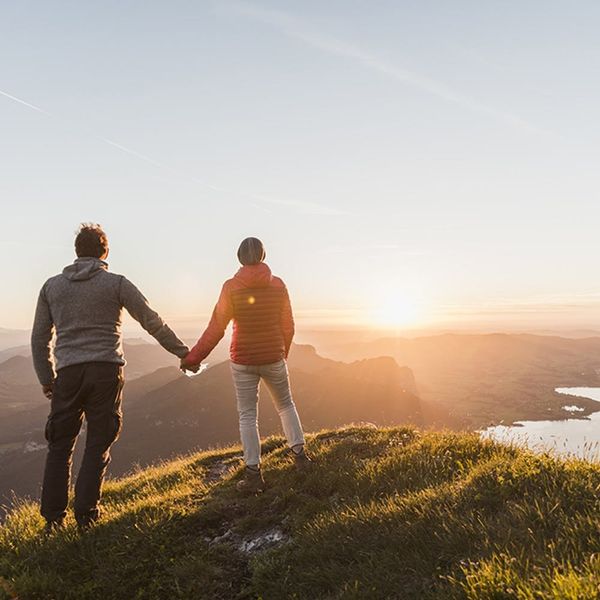 We all know that couple. The one that’s constantly kissing, giggles a little too much around each other, and simply has to be hand-in-hand when in public, to the point of everyone else’s discomfort. Ugh, why do they do that? It makes you wonder: Why do they — or anyone, for that matter — do these things, especially hold hands? Whether you’re pro-PDA or not, you’ve definitely held a hand or two before — your mom’s, your bestie’s, you name it. But the more you think about the actual act of holding hands, the more arbitrary it seems, despite being essentially synonymous with love, comfort, and support in our culture. Like most things, though, this sentimental grasp can be explained by science, and its roots aren’t all that romantic. Elizabeth Gilbert, psychologist and researcher for Psychology Compass, let us in on the evolution of the touchy-feely phenomenon.

Our primate ancestors were the first to practice this behavior, as the young often clung to their mothers’ backs as a means of survival. “An innate impulse to be physically close was required for safety and survival,” Gilbert says. Because of this, touch, specifically touch via hands, became one of the first senses to develop in our ancestors, and along with it came the association between touch and safety. According to Gilbert, evidence of this can still be observed in human babies: “Even now, babies are born with the Palmer reflex, innately grabbing onto whatever is put in their hand.”

This hardwiring stays with us into adulthood, and touch continues to signify safety and comfort. “When one feels isolated, anxiety and hyper-vigilance increase,” Gilbert states. “But holding hands signals that you are not alone. You have a partner who will help you tackle the big scary world, so you can relax.”

In terms of when holding hands took on a romantic connotation among couples, Gilbert can’t say with certainty, but, modern humans might not be the ones who came up with that either. “Our primate ancestors, including chimps, monkeys, gorillas, [and more] also hold hands to signal kinship and closeness, and bonobos sometimes hold hands while having sex,” Gilbert remarks.

Regardless of its beginnings, in the US in this day and age, holding hands certainly communicates to others that two partners are in a romantic, oftentimes committed relationship. “It’s a way to signal that you are a couple to the public,” she says. “And as dating without commitment, or ‘hookup culture,’ becomes more common, holding hands might even communicate something more intimate and meaningful than more traditionally sexual activities.”

And if holding hands with your boo doesn’t seem like it’s for you (hey, we know not everyone is into it), you might want to reconsider. Gilbert says that clasping someone’s hand not only decreases pain and anxiety, but studies have shown that it can improve general health, including lowering blood pressure and pulse rates, and facilitate bonding by boosting oxytocin levels. And we’ll at least put our hands together for that.

RELATED: 7 Tests to Demonstrate the Strength of Your Relationship

Annamarie Higley
Annamarie is a Californian who's been plopped in the middle of Missouri for her undergraduate studies in magazine journalism. She's a hiker, an eater, a lover of words. In her opinion, nothing beats a well-made breakfast sammy or a well-crafted sentence.
Healthy Living
Relationships
Healthy Living Mental Health