Searching for Gender-Neutral Undies? This Lesbian Couple’s Clothing Line Is Just for Tomboys 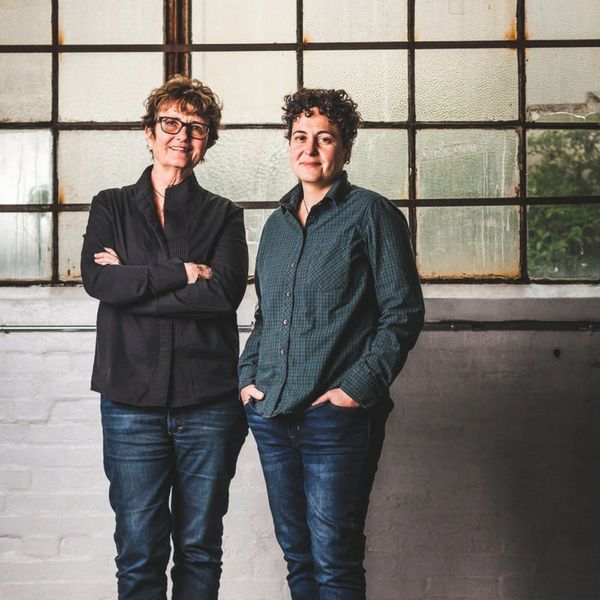 Though the last few years have seen a rise in gender-neutral style, Fran Dunaway knew the fashion industry needed more. In 2013, the Seattle-based media producer found that she was still unable to find a fitted dress shirt that wasn’t too “femme”; her wife, Naomi Gonzalez, was tired of hearing her sartorial complaints. So rather than feel defeated, the pair decided to create their own label, TomboyX.

Dunaway and Gonzalez started off their line with a tailored dress shirt. They worked hard with a team of designers to ensure special consideration was placed into the fit, specifically for women and gender non-conforming bodies, by introducing reinforcements around the collar and under the cuffs, plus hidden buttons, so their shirts wouldn’t gape open.

Dunaway and Gonzalez decided to call the line TomboyX because they both identified as tomboys and thought it had a good ring. They launched a Kickstarter in April 2013 to pay for the first round of fitted shirts and were shocked at the response. Within a month, the campaign was funded and people were reaching out to them to say just how much they felt seen by a brand for the very first time. The duo realized immediately that they had a unique opportunity on their hands to build a brand that could really put its customers at the forefront.

So, right out of the gate, they went back to their customers and asked: what do you want? Gonzalez, who was covering the brand’s customer service at the time, remembers sharing with Dunaway that so many people were asking about boxer briefs for women.

Dunaway tells us, “We started doing some research into boxer briefs and found out that when we searched boxer briefs for women, Spanx came up.” She laughs on the phone and adds, “We were pretty sure that wasn’t what our customer was looking for.”

So the pair set out to make a boxer brief that would become the hero product of TomboyX, a product that didn’t gape, was long-lasting, and essentially recognized and acknowledged individuals for how they present inside and outside, no matter what clothes they wear.

To date, seven percent of their current customer base identify as trans or non-binary. Dunaway and Gonzalez tell us that they “feel really proud that we can provide quality products, but also to provide a brand in which that [community] feels seen and heard.”

Since the brand currently operates entirely online, one of the biggest priorities for the couple has been traveling throughout North America to each and every Pride festival they can and to get their products into the hands of folks who may not otherwise have the means to see it.


Recently, after making a brand visit to a Pride celebration in Washington DC, Gonzalez shares that “one of the people who came to our table tweeted us later that she went home and wept because [TomboyX] were the first pair of underwear she’s ever felt sexy and confident in.” These types of messages and notes from customers are the ones that keep the pair going.

Having both been part of the lesbian community for decades, Gonzalez and Dunaway know the sheer importance of giving back to their community. They also want to ensure that, as they continue to grow, the people who have supported them know that TomboyX will continue to be thoughtful about the types of products they create.

“We rely on our customers in a very specific way, and we are so customer-focused,” says Dunaway. “It’s really important to me and Naomi, as the co-founders, to not lose touch or lose track of why we are doing this.”

Amanda Scriver
Amanda Scriver is a passionate storyteller and body image advocate based out of Toronto, Canada. When she isn't writing for various publications, she finds time to Keep Up With The Kardashians while partaking in life's greatest pleasure: the chip buffet. Don't ask her what her favorite restaurant is, it's complicated
Body Positive
Gender Issues
Body Positive Every Body Gender Inclusivity LGBTQ