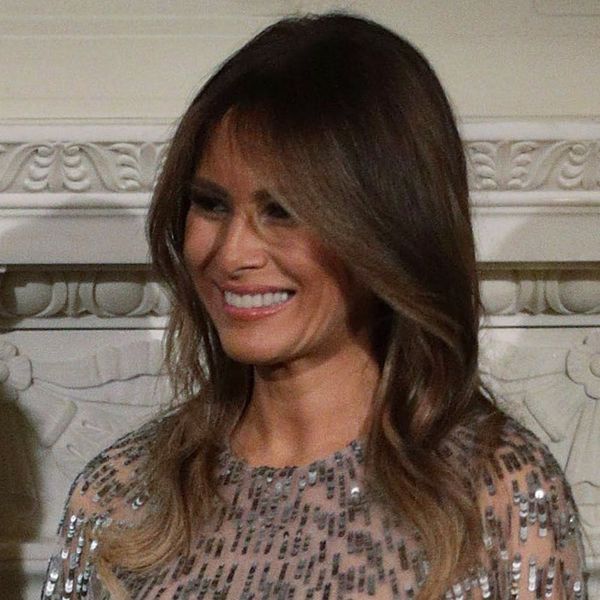 Talk about a sparkler! Melania Trump, who was on hand in Washington, DC for the White House Association dinner Thursday night, made an appearance alongside President Trump in a Sequined Capelet Gown ($7,995) from Monique Lhuillier’s pre-fall 2017 collection.

Featuring a slinky light-colored slip beneath a beaded chiffon overlay, the look was one of the most glam we’ve seen FLOTUS wear since Trump took office back in January.

While it was less pricey than the $51,500 floral Dolce & Gabbana coat she donned overseas in Italy or the $10,000 Michael Kors suit she wore for President Trump’s Joint Session of Congress, its $8,000 price tag was nothing to sniff at.

It wasn’t the first time the First Lady has worn the designer, having been spotted in a pink floral frock from Lhuillier back in July for a rally in Youngstown, Ohio, as seen on the designer’s Twitter page, and again in June for the Ford Theatre Gala.

She paired her latest look with some long-loose waves and a muted pink lip as she spoke out about her recent visit flood zones to Texas post-hurricanes Harvey, saying, “We saw so many who lost so much in these past weeks: a family member, a friend, a first home, or a precious keepsake. But in those very same people, I have seen the true spirit of this nation, an unwavering commitment to overcome, to rebuild, and to renew what was swept away.”

What do you think of Melania’s latest look? Let us know over @BritandCo.

Nicole Briese
Nicole is the weekend editor for Brit + Co who loves bringing you all the latest buzz. When she's not busy typing away into the wee hours, you can usually find her canoodling with her fur babies, rooting around in a bookstore, or rocking out at a concert of some sort (Guns N' Roses forever!). Check out all her latest musings and past work at nicolebjean.com.
Celebrities
Celeb Style
Celebrities Celebrity Style
More From Celeb Style