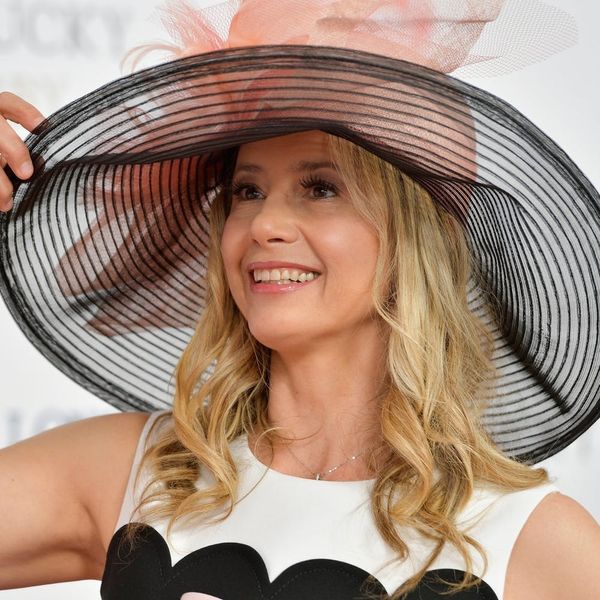 Those following the Kentucky Derby are likely already aware that it was Always Dreaming that took home first place, but it was the celeb attendees that took home the real (style) gold. Whether you partook in the festivities in an awe-inducing topper of your own or sat this one out on the sidelines, take a peek at who was hitting up the grounds at Churchill Downs in their weekend best below.

1. Courtney Sixx: The DIY queen shared a laugh with pal Laney Ziv in a black derby-ready creation from Hostie Hats.

2. Tom Brady: Gisele’s hubby Tom and former Red Sox player David Ortiz looked dashing and dapper while posing for a snap, with Tom in a black jacket with a pocket square and a tan felt wide-brim hat.

3. Mira Sorvino: Beloved Romy and Michele’s High School Reunion (which just turned 20) star Mira Sorvino was all smiles as she tipped her hat to the crowd. (Photo via Gustavo Callabero/Getty)

4. Joey Fatone: The former *NSYNC-er wasn’t about to let the ladies have all the fashionable fun: Check out that bold red statement jacket! (Photo via Gustavo Callabero/Getty)

5. Larry David: The funny man didn’t exactly get all decked out for the affair (and frankly, we’d be shocked if he had), but he WAS on hand to give us that famous Larry David (er… Bernie Sanders?) point. (Photo via Gustavo Callabero/Getty)

6. Tom Sandoval & Ariana Madix: The longtime reality couple from Vanderpump Rules hit up the event side by side for the second year in a row, him in checkered plaid, and she in a stunning red lace frock with a Giovannio masterpiece on top. (Photo via Michael Loccisano/Getty)

7. Kid Rock: Kid Rock isn’t exactly the first name we picture when we envision the time-honored Kentucky affair that’s been going since 1875, and yet, here he is, and in track pants, no less. We guess he is at the races, after all! (Photo via Mike Coppola/Getty)

Which celeb’s Derby look do you like the best? Let us know over @BritandCo.

Nicole Briese
Nicole is the weekend editor for Brit + Co who loves bringing you all the latest buzz. When she's not busy typing away into the wee hours, you can usually find her canoodling with her fur babies, rooting around in a bookstore, or rocking out at a concert of some sort (Guns N' Roses forever!). Check out all her latest musings and past work at nicolebjean.com.
Celebrity Style
Celeb Style
Celebrity Style hats
More From Celeb Style