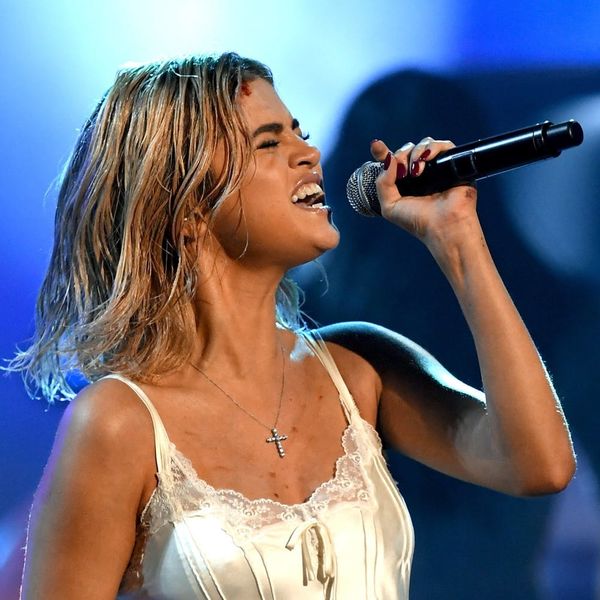 Selena Gomez stole the show before the 2017 AMAs even started when she arrived on the red carpet rocking new platinum locks. Later in the night, she made her return to the stage for the first time since undergoing a kidney transplant earlier this year, and her performance was an emotional — and dramatic — comeback.

Performing her latest hit “Wolves” with producer Marshmello (who wore his signature smiley helmet while playing the drums), Gomez moved around the scene of a fake car accident, backed up by an all-female troupe of dancers clad in white dresses. Gomez herself wore a white slip dress and white sneakers and appeared banged up from the faux car wreck, complete with a gash on her forehead and scraped-up shins.

The “Bad Liar” singer stumbled around the foggy forest backdrop before being lifted in the air by her backup dancers, but the quiet last few lines of the song were delivered in a much less theatrical manner. “I’ve looked for love in every stranger, took too much to ease the anger,” the 25-year-old sang softly. The crowd roared with applause, to which Gomez gave a little shrug and offered a subdued “thank you.”

No, thank you @selenagomez for that incredible performance 😍 #SELENAxAMAs #AMAs pic.twitter.com/tVSMetvX52

Gomez also used the AMAs to make a comeback in 2016, returning to the stage for her first performance after taking time off to deal with her mental and physical health in rehab. Singer Julia Michaels, who announced Gomez’s performance this year, said this would be her only television performance of 2017.

What did you think of Selena’s comeback? Let us know @BritandCo!

(Photo via Kevin Winter/Getty Images, video via The Hollywood Reporter)