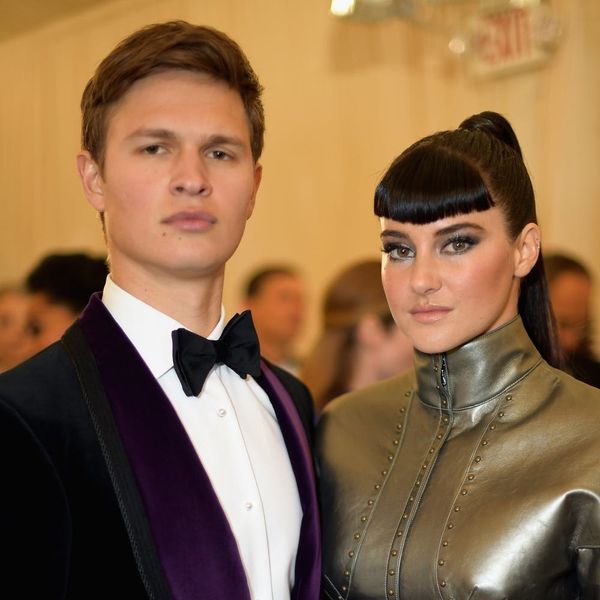 First, the 2018 Met Gala gave us the red carpet debuts of rumored couples Lili Reinhart and Cole Sprouse and Elon Musk and Grimes. And now we have a reunion between former costars Shailene Woodley and Ansel Elgort, too.

The actors posed together for photos outside the Metropolitan Museum of Art at Monday’s big event, to the delight of photographers snapping pics and fans waiting at home to see all of the action. Both wore Ralph Lauren — Elgort in a black tux with purple lapels, and Woodley in a silver, armor-inspired dress with a high neckline and ruffled sleeves.

The two last costarred in 2016’s Allegiant — the sequel to 2015’s Insurgent and 2014’s Divergent — but our favorite iteration of their on-screen pairing was in the 2014 movie adaptation of John Green’s novel The Fault in Our Stars. Woodley and Elgort played Hazel and Gus, two teen cancer patients who fall in love after meeting in a support group.

These days, both are busy with other projects. Elgort most recently starred in Baby Driver and November Criminals, and he has two other films due out this year. And Woodley, of course, plays Jane Chapman in the popular HBO series Big Little Lies, which costars Hollywood heavyweights Nicole Kidman and Reese Witherspoon.

Are you a fan of The Fault in Our Stars? Let us know @BritandCo!

Desiree O
Desirée O is a ‘Professional Bohemian’ who loves anything and everything related to the arts, entertainment, and pop culture. She ADORES being a ‘Newsy’ for Brit + Co, covering all of the latest tidbits of awesomeness that you want to read about. When she’s not writing, she’s either making messy art, going on long adventurous walks with her camera, or poking around over at bohemianizm (http://www.bohemianizm.com/). You can find out about Desirée O and her work at http://DesireeO.com/ or follow her on Twitter @DesireeO.
Met Gala
Pop Culture
Met Gala Movies Nostalgia Red Carpet
More From Pop Culture