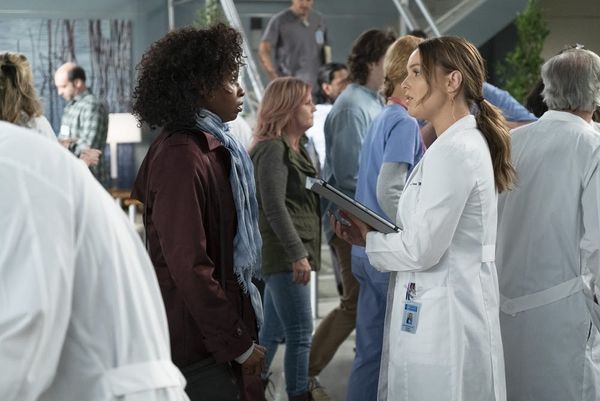 Earlier this week, Grey’s Anatomy showrunner Krista Vernoff said that the Thursday, March 28, installment would be the most powerful in the show’s 14-year history. She wasn’t wrong: The episode, titled “Silent All These Years,” poignantly dealt with consent and sexual assault, which resulted in some unexpected feedback from ABC. Vernoff said the network gave them some very specific notes on what they couldn’t show, but that Grey’s creator Shonda Rhimes fought back in support of airing the episode as it was written and shot. (Warning: There are spoilers and discussion of sexual assault ahead.)

“We received notes initially from ABC’s Broadcast Standards and Practices,” Vernoff told The Hollywood Reporter. “They give these standard notes: ‘don’t be too gory’; ‘don’t be too explicit in your language’; ‘no side boob.’ But the ones we got on this script included, ‘Please don’t show any fluid on the Q-tips’ and ‘Please don’t show any body fluids under the blue lights.'”

The notes were in response to the episode’s uncompromising portrayal of how a rape kit is administered to a survivor. Vernoff said Rhimes felt so strongly about the importance of the scene that she “declined” the network’s direction and ultimately persuaded them to reverse their stance.

“Shonda wrote back a pretty passionate response of the myriad ways that networks are willing to show actual violence, but that what we were doing here was the medical process that happens in the wake of violence, and they were trying to tell us we couldn’t show it,” Vernoff told THR. “[Shonda] said, ‘Respectfully, I decline these notes.’ Ultimately, ABC understood that she was right. I really give them credit that they came back and said, ‘You’re right. You can proceed as scripted.’ We then extended the invitation to that ABC Broadcast S&P executive to be part of the wall of women, and she came.”

The “wall of women” Vernoff describes was one of the hour’s most moving scenes. In the episode, rape survivor Abby (Khalilah Joi) needed surgery to treat some of the injuries she sustained as a result of the sexual assault, but she was afraid to leave her room because she saw her attacker’s face everywhere she went. Jo (Camilla Luddington) came up with an idea to line the hallway with all of the female employees at Grey Sloan Memorial, to support and protect Abby as they wheeled her to the OR.

Stand with us. #GreysAnatomy pic.twitter.com/KYKTnvzFRt

That scene, and the episode as a whole, resonated deeply with viewers. “This will go down as one of the most powerful scenes in tv history,” one viewer tweeted, while another called it the “purest, most honest, most caring story they’ve told.”

“I hope every survivor hears this, believes this,” episode writer Elizabeth Finch tweeted with an image of Kim Raver’s Dr. Teddy Altman telling Abby that the assault was not her fault. “I hope doctors look to Teddy Altman and ask themselves: How can I be more like her?”