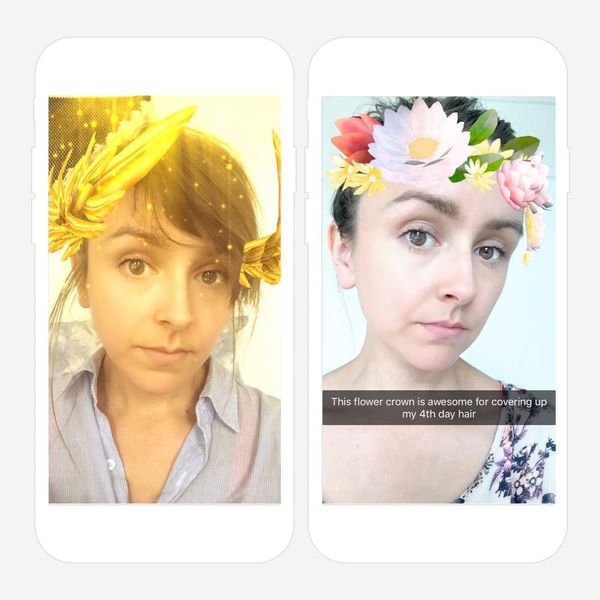 At 33, I’m right at the cusp of two generations — Generation X with Millennial Ascendant, if you will. I remember what life is like pre-Internet: I used AOL chat rooms, didn’t have a cell phone in college and made mixed tapes for my friends un-ironically. On the flip side, I’m all about that side hustle,selfies and personal fulfillment. So when it comes to social media, I toe the line between tech savvy and iPhone illiterate. That means that I basically gave up on staying current with social media after Instagram, but once I realized all my favorite celebs were posting to Snapchat on the regular, I was feeling the FOMO pretty hard and decided to give the app a try.

First things first: I sent out an S.O.S. (or: “Ya girl’s on Snapchat!”) on Instagram (is that allowed?) to recruit friends (followers?) for my Snap. About a half an hour later, I had 10 new friends and my first Snap that came with a filter and everything. Word to the newbies: Snapchat alerts your friends when you screenshot their snap, so there’s no opportunity for low-key creeping.

I had fun following my favorite celebs, most notably: Kim Kardashian, Kate Hudson, Sara and Erin Foster, Kylie Jenner, Alexa Chung and Gigi Hadid. My first impressions of the app: I don’t like that you can’t easily search for people and I don’t find the interface user friendly AT ALL, but man, these stories are addicting. Celebs: They’re just like us!

The next day, I decide to start posting to my Snap story, which I learned is a public collection of snaps you can post to continually. I found this an incredibly intimidating prospect. I’m pretty sure your first Snap story sets the tone for your entire Snap life, which is no thing to be taken lightly. Naturally, I posted a video of my cat sniffing my phone with the caption, “smell ya later.” I can feel my Snapchat quickly becoming a Snapcat.

One thing I do enjoy about the app is that I can post moments that I find share worthy, but not necessarily Instagram-share worthy, like this random but truthful sidewalk scripture that I walk past every day on my way to the coffee shop.

I have a theory about the Snapchat selfie filters, and it’s this: They’re the dreams of the social media world. No one cares about yours except you. Sure, you love looking at yourself with cartoon eyes and rainbow vomit, but even watching Kim K’s face swapping gets old. But who cares! Greek halos and Coachella crowns for me!!!!

I got pretty sick a couple days into my Snapchat journey and blame those damn beautiful flowering blossoms. No one responded to my sickness Snap, so I decided to continue my suffering in (stuffy) silence. Next was my attempt at sharing something useful, since people tell me they like the way I do my hair. Except I think all those people aren’t following me on Snapchat. Regardless, I’m so down for getting to doodle on my photos.

At first, sharing on Snapchat felt too personal for me. I was intimidated by the immediacy of it. After using it for a week, I can confidently say I’ve overcome that hurdle, but I haven’t gotten into a routine of using it often enough (I think part of a successful Snapchat is one that’s routinely updated). I also still don’t find the interface to be intuitive. I had to Google a lot (how do I get the selfie filters? How do I find friends? How do I use a photo from my camera roll?), which I never had to do for other social media platforms. Could be I’m just getting old. Add me?

What social media app are you super psyched about right now? Tweet us @BritandCo and let us know!

Megan Parry
Megan Parry is a lifestyle writer living in Philadelphia where she's making generous use of her library card, obsessively reading friends' natal charts, and learning how to differentiate between "dried apricot" and "juicy apricot" notes in wine.
Apps
Tech
Apps Snapchat
More From Tech