The Fight For The Armrest Could Be Over With This Gadget 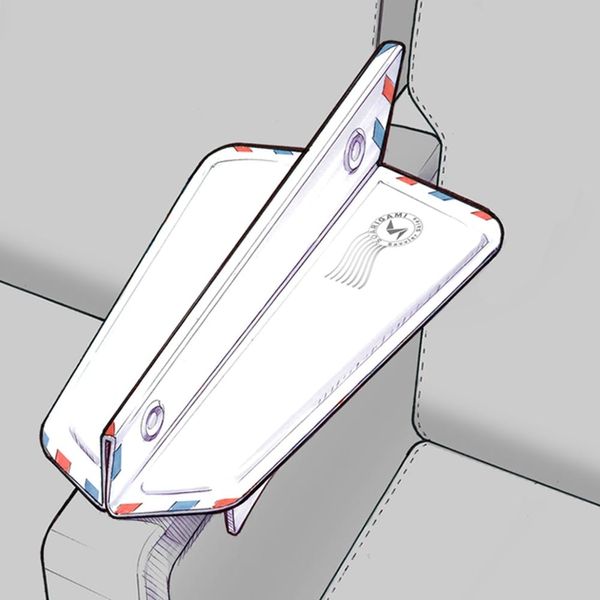 Besides the hours-long delays, endless security lines and terrible food selection (the brew is alright, though), the worst thing about traveling is sharing the armrest. Or *not* sharing it, as the case may often be. Soon travelers will be able to enjoy their flights (or train, bus and movie theater viewing experience) a little more as Soarigami sets out to make armrest sharing an elbow-fighting-free zone.

The origami-inspired seat divider diplomat may look like a paper airplane, but with its construction consisting of resilient plastic parts instead of fragile paper, Soarigami is built to support you and your neighbor.

Once folding and clipping the elbow blocker to the armrest, the sides extend slightly beyond. This allows both you and your flight companion to rest your arms on the Soarigami’s “wings” comfortably as it essentially doubles the resting area.

The simple but proficient device, which takes visual cues from airmail and Apple’s iPad Smart Covers, is super sleek. When not in use it breaks down perfectly, taking up little space in your carry-on.

While we’re excited to hit the skies with the Soarigami, everyone is gonna have to chill on the runway for a little as the patent-pending prototype is still in development. The wait to get your hands on it isn’t too long though; expected takeoff is early this year (hopefully there’s no delays), with a retail price of around $30. You can sign up to pre-order the Soarigami here. While you’re waiting, why not try testing out a DIY version in the meantime?

Will you be putting an end to the armrest wars with the Soarigami? Let us know in the comments.