The 15 Best Airport Breweries to Hit Up for a Brew 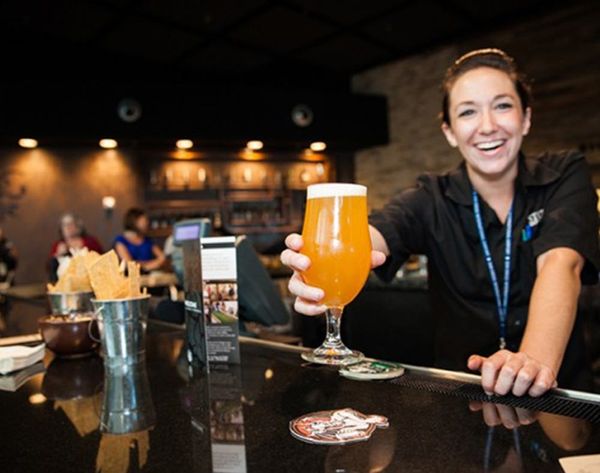 If you’re a frequent flyer, be sure your flight path leads you to savor some of the best craft brews that America has to offer. If you have to wait out annoying delays, dreaded lightning storms or aggravating mechanical issues, you might as well do it from a bar stool. No need for soggy pizza or grease-laden French fries to nurse your airport delay woes. Today’s travelers can keep up with the artisan beer movement, thanks to these breweries that are pouring their suds steps away from the tarmac.

1. Cigar City Brewing (Tampa International): Welcome to the only airport brewery where the beer is actually brewed onsite. Talk about a fresh pint! Get to Terminal C for Tampa-style Cuban food and CCB brews. In need of a pick-me-up? Forego a coffee and try CCB’s Café Con Leche Stout or the Cubano Espresso, popular drinks in the Cigar City of Tampa. Mazzaro’s Italian Market and Deli in St. Petersburg roast the beans for Cubano-Style Espresso Brown Ale — talk about a local brew! (via Thrillist)

2. New Belgium Hub (Denver International Airport): Sorry, Coors; you may be synonymous with the Rocky Mountains, but this mountain town’s craft beer scene is booming! If you find yourself stuck in a storm in DEN consider yourself not too unlucky. Grab your ski sweater and head on over to Concourse B in search of a stall outfitted with repurposed bicycle parts. Hunker down in New Belgium Hub with a Fat Tire Amber Ale. (via Derek Rubinoff)

4. Rogue Ales Public House (Portland International Airport): Do what Portlander’s do best: Do it local and try a beer sampler. If you find something that you really like, bring the taste of Portland home with you, as the brew house conveniently offers bottles and growlers that you can take on your flight. May we suggest that you get on over to Concourse D, belly up to a copper countertop and indulge on the Rogue Hazelnut Sweet Nectar? The rich hazelnut aroma and nutty aftertaste will surely sweeten your takeoff. (via Thrillist)

5. Stone Brewing (San Diego International Airport): Beautiful weather and a world-class brewery is hard to beat. Located in Terminal 2, Stone Brewing is pouring over a dozen drafts, offering craft cocktails and food that’s actually good. We suggest starting off with their flagship beer, Stone Pale Ale. In the mood for something big and bold? Then don’t hold back and try Stone’s Russian Imperial Stout… that is, if you can handle it. (via The Full Pint)

6. Gordon Biersch (San Francisco International Airport): In an airport that offers locally sourced concessions, private changing rooms and a yoga room, could we expect anything less than a stellar brewery? Get over to Terminal 3 to taste what San Francisco Bay Area’s largest brewery has to offer. Authentic, freshly brewed, German-style beers are their MO, making it the closest some of us will ever get to Oktoberfest. (via Alcohol Tourism)

7. DuClaw Brewing Company (Baltimore-Washington International): With a flair for marching to the beat of their own drum, DuClaw sits near Southwest’s ticket counters in front of the gates. Let say you’re meeting a pal at the airport, you’ve held your handmade sign in the air until your arms start shaking, only to discover that the flight has been delayed. DuClaw is your retreat, where you can sit in roomy comfort and enjoy a beer while you patiently await your friend’s arrival. (via Phoenixville Dish)

8. BRKLYN Beer Garden (JFK International): Delta’s Terminal 2 redesign is a haven for travelers all too familiar with delays at this bustling airport. Beer gardens are historically known as gathering spaces for communities, and that is exactly what this outpost is. Pouring over 20 brews, this is your water hole when you want to try something local. (via Beer Union)

9. Good People Brewing Airport Pub (Birmingham-Shuttlesworth International): Offering up good Southern culture and hospitality to people all over the world, Good People Brewing is a welcoming retreat for thirsty travelers. Any certified Cicerone on staff will tell you to try the big, bold double IPA Snake Handler, whose orange-flavored bite matches its surprisingly floral one. (via Jeffrey Williams)

12. Bell’s Brewery Bar (Grand Rapids International): Known as Beer City, USA, Grand Rapids is a beer snob’s dream. On your next flight through the Midwestern main terminal, take a load off at the brand new Bell’s Brewery. If it’s summertime, you can cool off with their ever-popular seasonal refresher, Bell’s Oberon: A cloudy, citrus-forward wheat. If you’re lucky, the bartender will add an orange slice to bring out Oberon’s fruit-forward flavor. (via MLive)

13. Rock Bottom Brewery (Minneapolis-Saint Paul International): You know you’ve hit rock bottom when you’ve spent 12 tiring hours in the airport while the city of Minneapolis is blanketed in six feet of snow! Shake it off and swap annoying travel stories with your newly acquainted travel buddies at the Rock Bottom Brewery bar over a few pints of local nectar. (via Choose Duluth)

14. Goose Island Brewery Pub (O’Hare International Airport): Busy airport, cranky travelers, heavy luggage… take a break and refresh yourself with a cold pint. Thanks to Goose Island, travelers can cheers to the Windy City while straddling a bar stool in Terminal 1. (via Goose Island)

15. Schlafly Tap Room (Lambert-St. Louis International Airport): Budweiser may reign as king of St. Louis, but real beer aficionados expect greater fermenting feats. Make your morning layover fly by with a liquid breakfast that will keep you satisfied well into your flight… bring on the Oatmeal Stout! (via Schlafly Bottleworks)

Know of any airport brew pubs we may have missed? Share with us in the comments below!

Michelle Swift
Michelle Swift is a freelance writer and blogs on michelleswift.com. She has an affinity for running, culinary eats, travel and sparkly gold things. People and adventure light her up like a hot pink neon sign!
Home
More From Home