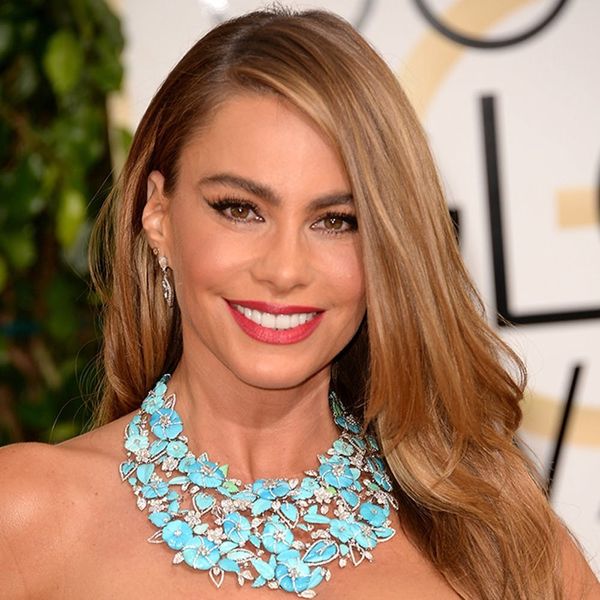 Over the weekend, recently engaged Sofia Vergara joined the ranks of famous bridesmaids Rihanna + Lauren Conrad in standing by her BFF as she exchanged vows. Though it goes without saying that a wedding with Sofia Vergara attending was a blast, after taking a scroll through her Instagram snaps, it’s confirmed that the lady that wore yellow is a guest everyone would want sitting at their table (and as a dancing partner).

The Modern Family actress + Reese Witherspoon gal pal rocked a strapless pastel yellow dress alongside her fellow bridesmaids while the bride wore a gorgeous, similarly strapless floor-length (plus train) white gown. Sofia and her bride BFF are indeed beautiful, but we’re totally struggling with taking our eyes off of her Magic Mike man candy date, fiancé Joe Manganiello. You think they played “Pony” for him? ;)

The wedding night must have been a cheat night for the Latina star, who hasn’t been shy about her prenuptial diet — she, or really anyone, doesn’t need to be on a wedding diet though, TBH. She posted a photo of her indulging in a nicely sized slice of the wedding cake with the caption, “It’s bad luck if you don’t eat wedding cake.” Since Sofia and Joe, who got engaged in December, haven’t revealed a wedding date yet, we’re guessing the sexy duo was taking lots of notes in prep for their own big day.

One of those things that *could* be recreated is the dress she wore for her bestie’s event (you never know; she could go the Alison Pill route and rock yellow as a bride!) If you want your bridesmaids to live like Sofia on your wedding day, send ’em a softball nudge with a link to the ASOS Wedding Ruched Bodice Bandeau Maxi Dress ($135). Budget-friendly + a perfect color for your summer (or spring 2016!) wedding — with a side of celeb-lookalike status ;)

How gorgeous does Sofia Vergara and her newlywed BFF look? Share your thoughts with us in the comments.